Defined as an art movement from the 1960s -70s, Minimalism was a reaction to Abstract Expressionism. I will discuss artists who contributed to this genre: Cy Twombly, Agnes Martin and others.

Abstract Expressionism emerged in New York in the 1940s with such illustrious artists and movements:

Since 2013 cursive handwriting was deemed not to be a requirement by federal standards for students. Interestingly, Abstract Expressionist and Minimalist Cy Twombly incorporates scribbles, calligraphy and graffiti into his work.

I was first introduced to Cy Twombly at the Philadelphia Museum of Art and was somewhat bewildered by its meaning. In the museum’s collection is "Untitled (Bolsena)" from 1969 where the artist used graphite pencil and wax crayon, as well as oil-paint house paint, on canvas.

Many years later, Twombly would be celebrated with a major retrospective at the Center Georges Pompidou in Paris from November 2016-April 2017.

Not surprisingly, the Philadelphia Museum of Art loaned "Fifty Days at Iliam" (1978) – 'a painting in ten parts' - to the Paris exhibit. Upon its return, it will be installed with a 2016 acquired gift of five major sculptures from the Cy Twombly Foundation.

At a recent exhibition at the Museum of Fine Arts, Boston titled "Seeking Stillness," I was moved by works by Contemporary and Minimalist artist Agnes Martin.

Inspired by Zen Buddhism and Taoism, Martin conveys simplicity and austerity in her work. One of the works displayed was "Untitled #15" (1988) - 'repetitive pencil lines' which, upon contemplation, reveal "light, formlessness, breaking down form." 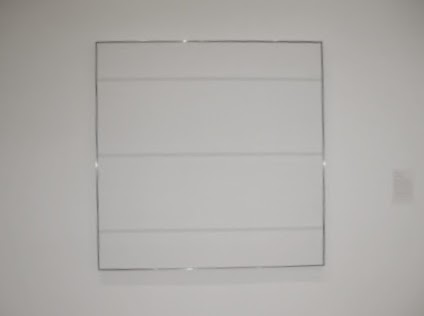