Pieter Bruegel the Elder was born in 1525 on the Dutch-Belgian border. Best known for European landscapes, his two sons would also become notable artists. I’ll discuss their illustrious works.

Pieter Bruegel can stylistically be compared to Hieronymus Bosch of the same era. This Dutch artist’s 'figurative anthologies' and landscapes are significant in the history of Netherlandish art.

In Greek mythology, the "Fall of Icarus" is a story told by Pieter Bruegel in a painting by the same name. Despite being warned by his father Daedalus, Icarus flew too close to the sun and melted his wings made of wax. He plummeted into the ocean and drowned. In his tribute, the sea was named Icarian and the nearby island Ikaria.

Pieter Bruegel felt compassion for peasants, as they seemed not to be affected by the changing seasons.
He was nicknamed "Peasant Bruegel" to differentiate him from his sons. He dropped the 'h' from Brueghel, although his sons used the family name.

His "Hunters in the Snow" is considered one of the greatest landscape paintings in the history of art. This esteemed work was once owned by a wealthy patron. When he fell on bad times, he turned it over to the city of Antwerp.

Bruegel the Elder’s two sons were taught by their grandmother. Pieter Brueghel the Younger – who signed his name Breughel after 1616 - was nicknamed "Hell Brueghel" as it was believed he painted demons. It was however his brother Jan Brueghel the Elder who was responsible.
Jan was nicknamed "Velvet Brueghel" because of his use of rich fabrics in his art.

One of Bruegel the Elder’s magnificent paintings is "Peasant Wedding" (1567) which he collaborated with his son Pieter Brueghel the Younger.

It’s apparent there was a demand for the Elder’s works. Apart from his own work, Pieter Brueghel the Younger copied paintings by his father to sell to the public - as most of the Elder’s work resided in private collections: the imperial collection of Rudolph II in Prague and the Farnese collection in Parma.

One of my favorite paintings by Pieter Brueghel the Elder is "The Harvesters" (1565) which can be seen at the Metropolitan Museum of Art, NY. 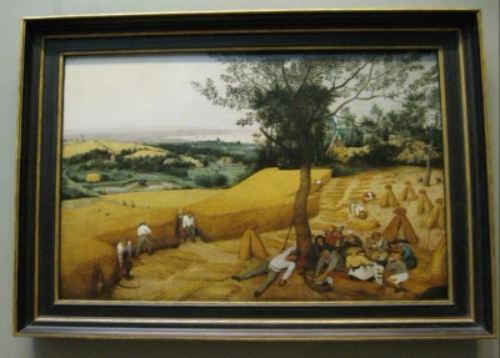 Photo of "The Harvesters" courtesy of the author Camille Gizzarelli