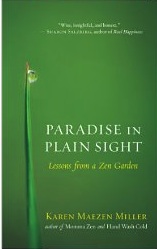 Paradise in Plain Sight: Lessons from a Zen Garden by Karen Maezen Miller is a beautiful book, part memoir and part Zen guide. Maezen Miller is a Zen Priest and teacher at the Hazy Moon Zen Center in Los Angeles, and author of two prior books - Momma Zen and Hand Wash Cold. As in her prior books, in Paradise in Plain Sight she shares stories from her everyday life as a wife, mother, and writer, bringing the teachings of Zen alive and making them relevant to modern, layperson, living.

Paradise in Plain Sight revolves around a garden Maezen and her husband acquired as a backyard, along with their new home, in 1997, at the start of their marriage. It is the oldest surviving Japanese garden in Southern California, once part of a large garden estate, and at the time they bought it, overrun by invading English Ivy and runaway bamboo. Repairing and caring for this garden became a major focus of Maezen’s life, parallel to her evolution as a wife, mother, and ultimately, Zen teacher. In this beautiful book, the garden manages to be both metaphor and not metaphor – a way of talking about lessons of transience, acceptance, forgiveness, endurance, discipline and more. In her hands, each part of the garden – the ponds, the trees, the flowers, the critters – become metaphors for these themes; and yet, they are also not metaphors, but simply parts of a whole - the real garden (shown in the accompanying pictures.)

The ultimate theme of this book is that our life as it is, not as we would like it to be, is both the ground and fruit of our spiritual practice – this is our paradise. Of course this is easy to say, and almost cliché when we do, but realizing it, and living it, is another thing altogether, and what practice is really meant to support us in. Because Maezen shares so many stories from her life and garden to illustrate this, Paradise in Plain Sight is a book anyone can enjoy, without prior Buddhist knowledge. Yet it’s a testament to the book’s depth, and its Zen transmission, that long-time Buddhists will discover many rich nuggets of wisdom within its pages as well. Consider this explanation of The Four Noble Truths:

Maezen shares many stories from her time spent with her root teacher, Taizan Maezumi Roshi (1931-1995), one of the most influential Zen teachers to come to the West. She talks about what it means to be a student, the joys and struggles of sangha (spiritual community), and the maturing of a meditation practice over time. In this passage, she shares part of what Maezumi offered her:

“Maezumi introduced me to a dimension of love that we do not often experience. His love was not administered in the guise of charity or sympathy. He did not serve as a counselor, advocate, or intermediary. He had no suggestions for how I could improve myself. He simply sat in a room. When he rang a bell, you could enter, sit in front of him, and be seen. The two of us would talk a little and laugh or cry: whatever. Gradually, I would relax and stop trying to make an impression. His kindness was the profound kindness of seeing a person or thing completely, without judgment. I learned two things by this: that it is rare to be seen and that seeing without judging is an act of love.”

Paradise in Plain Sight is a beautifully written, insightful book that will deepen any established practitioner’s insight, or serve as a wonderful introduction to the dharma, and particularly Zen, for the interested beginner.