The newest "superhero" isn't a man of steel, but a man of letters.

What the world needs is more pensive heros. That's just what Noah Wyle brings us in the TV movie The Librarian. Executive Producer Dean Devlin (Independence Day, The Patriot) is producing the movie through his Electric Entertainment company. 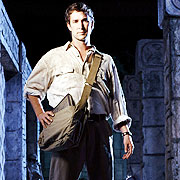 The Librarian will premier on December 5th, 2004, on TNT.

The Librarian is in charge of a vast archive for mankind's greatest secrets. Where is this secret library? Underneath the New York Public Library of course! This is an archive unlike any other. The Librarian oversees care of the Golden Fleece, Excalibur, the Ark of the Covenant, and almost every significant artifact from myth and history.

Wyle's character doesn't simply dust and catalog. As with any good librarian, he protects his collection from evil foes. These are enemies who, given the chance, would use the priceless treasures to wreck havoc on the world. Think of Wyle as Indiana Jones with the wisdom of a reference librarian.

There has also been a follow up movie, The Librarian -- Return to King Solomon's Mine. This isn't earth shattering film making looking to change lives. It is fun, slightly cheese, adventure that you can sit and enjoy.

Looking for an exciting read with a hero librarian? Take a look at the review of The Librarian, by Larry Beinhart.