The sequel for the GameBoy Advance, the Nintendo DS features two screens of gameplay, and a folding clamshell design to protect those screens from harm. 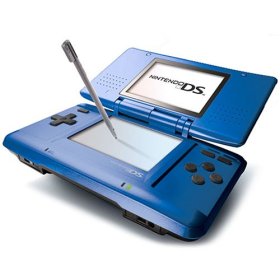 The top screen is a traditional, classic screen. The bottom screen is a PDA-style touch screen that works with a stylus (plastic pen). The D-pad is on the left of the lower screen, the directionals on the right. You get stereo sound, a microphone, and best of all, built in wireless connections!

That means that you can play games with up to 15 other people in your area without any cables at all. Everyone on your bus could chat or challenge each other. Study hall and waiting in line becomes an adventure. There's a built in clock and calendar, and you can even choose your name and favorite color.

The game selection is, admittedly, pretty pitiful to start with. The few games that are out are really not that great. However, the DS lets you play not only the new games (on a very thin card like the Nokia) but also the old style cartridges as well. So you can bring your entire game library from your previous systems over to this new game! That gives you easily hundreds of games, many being sold at bargain-basement prices, to play on your new system - with the nice new controls and back-lit screens.

The wireless built in PictoChat is SUPER fun. We have two DSs in our household and every time people come over, we get them playing with PictoChat. You immediately launch into games of pictionary, guess-the-shape, silly notes, and much more. You practically don't need a game, if you have someone fun to talk to!

My only concern is with the durability of the touch screen. They do sell plastic protectors for the screens which I *highly* recommend. If you wear out that touch screen with all the games, you'll be pretty upset as it stops responding quickly in games.

The one game we've found so far that is truly fun is the new Mario game, which lets you do mapping and selection choices on the bottom screen while you have the main view on the top. With the stereo sound and incredible graphics, it's really like playing a GameCube game on a system you can carry in your pocket. The other games that are out are OK, but not stellar.

Still, even playing "normal" GBA and GB games on this system, the backlit screen is just as nice as with the GBA, and the clamshell design keeps the screens safe from damage. I highly, highly recommend getting your hands on this system - you can play all your existing games and picto-chat for hours while you watch for new games to be written for its super-cool dual interface!