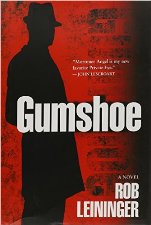 Gumshoe is the first installment of the Mortimer Angel series by Rob Leininger. Mortimer Angel has just retired from the IRS and is about to take on a new job working as a gumshoe for his nephew, Greg. Of course he’s had no experience, but as a typical man, thinks he’s going to be fabulous. The story takes place in Reno, Nevada, and the mayor and DA have been missing for several days. Mort’s ex-wife, Dallas (the love of his life), has been living with the mayor, Jonnie. Dallas calls Mort on his first day on the job with car trouble, so he meets her at the mall only to open the trunk and discover Jonnie’s head. Two more severed heads later, a strange woman who has moved into his house, and a female PI (who is a power lifter and black belt, among other things) hired to find Jonnie’s murderer, Mort is into the case up to his eyeballs.

Leininger is a typical male writer – all of the women are gorgeous, have perfect figures, and are slightly dippy. Fantasy, most likely, but since the story is written tongue-in-cheek, and is essentially a farce, it fits. Readers will be smiling throughout the course of the story, and even though it’s humorous, there are twists and turns, plenty of palpable suspense, and a serious need to find out “who-done-it.” The ending is a surprise, of course, and much of the story is reminiscent of what politicians continue to get away with even now.

Leininger does a good job of introducing his characters – most readers know somebody like each one of them, and they could be real people. The book flows well, and is a fast read. Readers who don’t like their thrillers with too much killing and graphic violence will enjoy the book, but should be warned that there is some foul language including a lot of references to deity that will make most Christians uncomfortable.

This book may be purchased at Amazon:
Gumshoe (Mortimer Angel), Hardcover

The Shape of Night Book Review