And one that I have been looking for a long time: Beyers Schiffchen-Arbeiten Heft II in Swedish translation from approx 1925.

The first editions were published by LTs publishing company and the last/latest by Natur & Kultur. The first edition contained 104 pages and the later 107 pages.
These books are probably the most important ones being published about tatting in Sweden, and they are well known internationally.
The authors writes in the preface that they wanted to publish the book because there was no modern Swedish edition on the subject at that time and they thought there was a great need for a tatting book with tutorial and patterns. One can only agree!

The book is still relevant and in demand almost 50 years after the preface was written.The book contains a variety of patterns on edges, bags, collars, stars, doilies and bridal crowns.
In the later editions some patterns has been removed and others has been added.
The books have been published in English as Tatting Patterns and Designs 1974 and 1988, on Norwegian Nupereller 1981 and in Dutch Frivolité 1982. Perhaps also in more languages that I don’t know about?

The book contains tutorial, washing instructions and patterns of doilies, edges and a couple of bridal crowns. 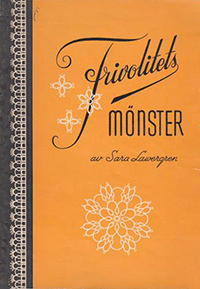 Of course I also know of Sara Lawergren's booklet Frivolitetsmönster (Tatting patterns) that was printed in 1955, 1957 and 1960.
>It contains 63 pages and apart from tutorial also 43 different patterns of edges, snowflakes, stars and doilies.
Sara Lawergren has published several books on embroidery and crochet.

Also she has made a great contribution to the tatting community.

I will write more about her books in a later blog post.

>One can easily understand the need Gun Blomqvist and Elwy Persson felt when they published their first book in 1967, because there is not much more published in Swedish.

This is what I found when I searched the libraries and the Internet: 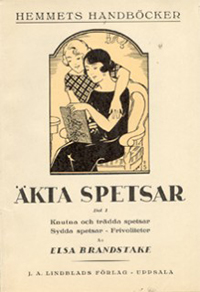 The paperback book has a chapter on tatting, and was published by J. A. Lindblads Publishing Company in Uppsala 1925. 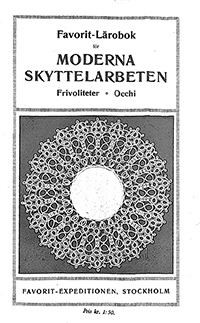 The booklet is 32 pages long, published in the first edition 1923 by Favorit-Expeditionen, Stockholm and was printed by Lehmanns in Dresden.

The book is a translation from the German original from 1922 “Favorit-Lehrbuch für moderne Schiffchenarbeiten” and contains 52 different patterns on doilies, stars, edgings and collars. 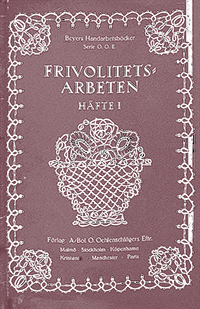 Frivolitetsarbeten häfte 1 is a 52 pages long booklet that is a translation of a German original printed in 1923.

The German original, Schiffchen-arbeiten I (Frivolitäten) Volume 36, was published by Otto Beyer Publishing Company in Leipzig and edited by Emmy Liebert.

It was published in two editions, 1915 (50 pages) and 1921 (63 pages). The second editions had additional patterns included and the cover changed.

Schiffchen-arbeiten II, volume 40 with 38 pages printer 1920 and edited 1922 is supposed to exist in Swedish translation but I haven’t seen it anywhere.