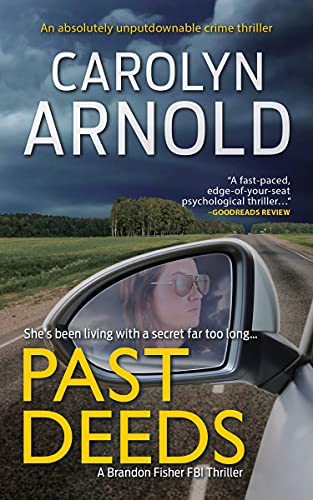 Past Deeds is the eighth installment of the Brandon Fisher FBI series by bestselling author, Carolyn Arnold. When a prominent prosecuting attorney is murdered in what appears to be a sniper shooting while leaving some high-end apartments, the FBI is called in. The FBI team consists of Kelly, a new agent, Jack, the supervisory agent, Brandon, and Paige. Brandon and Paige have a history and are very uncomfortable working together, but do their best to get along and solve the crime. As they investigate and uncover clues, there are conflicts, both between Jack and Kelly and between Brandon and Paige. The name of this novel most likely comes from the fact that several years prior, while Brandon was married, he and Paige had an affair and his guilt is evident throughout the novel.

The storyline of the book is fascinating, and as the story unfolds, readers will want to know more – while there is only one victim in the case, they learn that there were other victims with the same MO and as they attempt to link the cases, it gets complicated. Arnold may be a bestselling author, but she definitely needs a grammar 101 class. There are dozens of grammatical errors throughout, and the characters are not developed for anyone reading this as a standalone book. There is mention of characters from past books in the series, such as Zach, and readers will have no idea who Zach is. While Brandon is supposed to be the protagonist, he is not the lead character, and the other characters upstage him. Apparently this is a series that must be read in order to be understood.

There are some interesting scenarios, and the dénouement is a surprise. However, while the storyline is good, this book is not well-written and is quite amateurish compared to most published thrillers. Readers should start with the first book in the series, and maybe the previous books will be about Brandon Fisher – after all, the series is named after him. There are better series out there and thriller aficionados will most likely want to pick up something that is written in proper English.