Amber and the Baltic Sea's common thread is the location where most of the amber used for jewelry comes from~ the sea! I was surprised to learn this fact. Although amber is found along the shores of a large part of the Baltic Sea and the North Sea, the great amber-producing country is the promontory of Sambia, now part of Russia. In addition to extracting it from the sea it also can be mined from pits in locations around the globe. 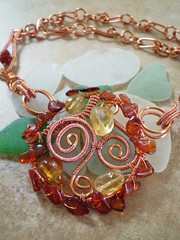 Pieces of amber torn from the sea-floor are cast up by the waves, and collected at ebb-tide. Sometimes the searchers wade into the sea, furnished with nets at the end of long poles, by means of which they drag in the sea-weed containing entangled masses of amber; or they dredge from boats in shallow water and rake up amber from between the boulders. Divers have been employed to collect amber from the deeper waters.

I think most of us assume it is from tree sap but that is not quite accurate. Sap is technically something that moves throughout the plants vascular system and amber does not. Amber is actually a resin. Because it used to be soft and sticky tree resin, amber can sometimes contain insects, feathers, hair and even small vertebrates. The first mental image I have when someone says “Amber” is a scene in the movie Jurassic Park- the mosquito in the amber from which was extracted the DNA of the dinosaur.

Amber occurs in a range of different colors. As well as the usual yellow-orange-brown that is associated with the color "amber", amber itself can range from a whitish color through a pale lemon yellow, to brown and almost black. Other more uncommon colors include red amber (sometimes known as "cherry amber"), green amber, and even blue amber, which is rare and highly sought after. Blue amber is primarily found in the Dominican Republic.

Amber has been a highly-valued material since earliest times. Worked amber dating back to 11,000 B.C. has been found at archeological sites in England. Amber was widely believed to have magical healing powers. Amber is extensively used for beads and other ornaments, and for cigar-holders and the mouth-pieces of pipes. It is regarded by the Turks as especially valuable, inasmuch as it is said to be incapable of transmitting infection as the pipe passes from mouth to mouth. Some give amber to teething children to sooth their mouths. Mothers would wear necklaces of amber beads allowing the child to “teeth” on them.

Polishing amber for jewelry or carving requires working by hand with a jeweler's saw and fine-toothed files. It is wet-sanded with 320-grit cloth and finished with a 400- or 600-grit wet-sanding cloth. It can be drilled with dry steel drills, using a low speed and slight pressure, to prevent heating and cracking. It is then polished with tin oxide or cerium oxide, using a leather buff, Jelt wheel or pad, or chamois board. Periodic polishing with a silicone-based wax restores shine and decreases evaporation and surface oxidation.

Pressing amber for producing gems is done by using small clear pieces of amber that are softened and fused in a vacuum with steam at 400°F (204°C) or above. The pieces are pressed through a fine steel sieve or mesh, mixed, and hardened into blocks. This pressed amber is called ambroid and may contain bubbles that have elongated under the heat and pressure. Sometimes modern insect inclusions are inserted into pressed amber and the ambroid may be dyed, usually dark red.

Although the process of amber formation from tree resin continues, it takes millions of years for the resin to harden into amber. As amber deposits are depleted by mining, and resin-bearing trees are cut or burned rather than allowed to fossilize, the supply of raw amber will continue to dwindle although it is said that mining could continue with the current supply and exceed 300 years.

I use amber in my designs from simple to ornate. The amber gives a piece a special feel of warmth and sunny-ness. I especially love to pair it with copper- I feel that they complement each other. Amber can be used in all sorts of jewelry: brooches, necklaces, rings, bracelets and earrings to mention a few.

Remember to sign up for Bella Gems Newsletter so you won't miss another article!!


You Should Also Read:
Pearls, Natural Beauties of the gem world
Gemstones Precious vs Semi Precious
Safe Cleaning Methods for your Gemstones