The PSP is a fantastic unit with a great screen - but it scratches VERY easily. The Stealth Case helps keep the PSP safe from the dings life throws at you. 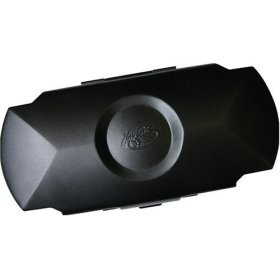 The Stealth Case is made by Mad Catz and is also offered in a GameStop branded unit at EB Games and GameStop. It's the same unit. It's a hard plastic outer shell that creates a clam shell around your PSP, much like the innate setup of the Nintendo DS.

The clamshell idea in general is great. It opens up for easy playing (and even offers a shield against ambient light which can be great). The case holds two memory sticks, and the bottom forms a little stand if you're watching a movie and want to prop your PSP up to watch.

On the down side, this is NOT light. When you look at the difference between the regular Nintendo DS and the DS Lite, you sort of have the idea here. The PSP on its own was never a light unit - and if you throw in this bulky case, it's now even heavier. I'm not saying that your arms will start to hurt because you're holding it, but it is noticeable.

Really, they key here is that PSP owners have to do *something* to protect their PSP. The way the PSP ships, it is wide open to destruction. That screen - which is of course its fantastic advantage - is completely exposed to anything which might scratch or even break it. You have to do something to give it protection. This unit is relatively cheap and gives you that protection both against gentle dangers (such as a cloth bag might shield against) but also hard drops and smashes. If you take your PSP out of the house at all, that is really important.

The way the top of the clamshell is set up, this can even help the PSP if you drop it while playing, because either the clamshell will snap shut when it hits, or the triangular space created between the main PSP and the clamshell top will stop the screen from impacting the ground.

Highly recommended for PSP owners, considering how much the PSP itself costs!

Buy the Stealth Case from Amazon.com