Aghia Marina is the centre of tourism on Aegina (Pronounced Eggina), a small Greek island located 20km south-west of the Port of Piraeus. On the east coast used to be a tiny little village inhabited by a few fishermen and their families before it was discovered by tourism. 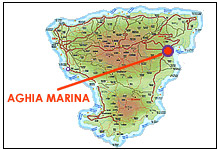 Today it is a highly developed and commercial tourist resort where most foreign visitors to the island spend their holiday. On weekends many Athenians escape the loud city to enjoy the relaxing atmosphere and all the comfort offered by the village.  In the centre of Aghia Marina, you will find Voula Apartments, a cosy building of 20 apartment rentals.

Restaurants, serving traditional Greek homely and international food; cafes and bars for every taste performances of Greek music and dance; discos and clubs where the entertainment goes on till dawn; shopping, various facilities and much more; all together cater for making your holiday memorable.

Since the village is rather small you will soon feel at home and have found your favourite haunts. Everything is within walking distance and most things happen around the main street that goes through the village. 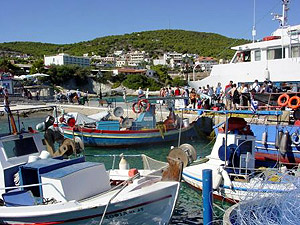 Below the main street is the small port from which small ferryboats commute to Piraeus Port several times a day. The trip takes about an hour by ferry. In the bay, there is a long, sandy beach where the water is so shallow that you can wade for several hundred meters. At the end of the beach is a small chapel - the original church of Aghia Marina - which has given the name to the village. On the other side of the port there are flat rocks and the water is not as shallow as by the beach, yet very popular for both swimming and sunbathing. Above the main street you will find most of the dwelling houses and some hotels. An excellent place for a walk after dinner.  It smells lovely from both the gardens and the many pine trees, and the view is magnificent. 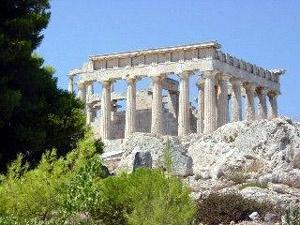 Whilst in Aghia Marina, it is worth visiting the temple of Aphaia which is approximately 3km away (2 miles). Built in local stone, this Doric style temple is well worth a visit despite the fact that the artefacts were removed from it in 1811 by a group of Archaeologists from Germany and England who sold them to Ludvich, King of Bavaria and which has, since 1813, been on display in the Munich Glyptotheque. The temple has been described as "the most perfectly developed of the late archaic temples in European Hellas".  The temple is built of local "poros" stone, and it served as a model for the construction of the Parthenon and other temples in Greece, Asia and southern Italy.

The view form the top of the hill is worth the 5 km walk (over 3 miles) from Aghia Marina.  Go to the end of town with the water on your right and straight up the hill until it becomes a wooded trail - this is the footpath to the Temple of Aphaia. At night peacocks roam the quiet hill by the temple.  Alternatively you can take a bus, which will drop you off right at the temple. It can of course also be reached by car, motorbike or taxi.  This is a must-see for all visitors to Aegina.

Why You Need A Travel Agent