"Metal Gear Solid Portable Ops" for the Playstation Portable is the first PSP Metal Gear game that is actually a part of the story. In it, Big Boss must lead a unit of comrades against his former unit, the now-rogue FOX Unit. 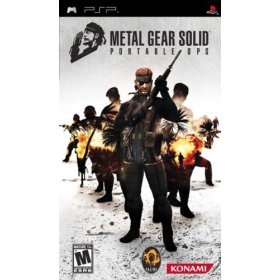 Most of the gameplay is similar to Metal Gear Solid 3 and its stealth-based gameplay, with a few new weapons added. Some things are limited by the PSP's buttons and systems, but for the most part it plays and looks like Metal Gear Solid 3. The camera is taken from Metal Gear Online, included with MGS3: Subsistence, and can be alternately helpful and annoying. A new sonar has been added, which shows the sound that both you and those near you are making, and gives a rough estimate of their position. The camouflage system is gone, now replaced with the "blending system".

The main concept of the title is the "Comrade system", where you can acquire new allies to use in your fight against FOX. In early trailers, it seemed like Snake would be leading a squad (and thus multiple people would be active at once), but in truth, it is closer to other games of the series. Only one soldier can be active at a time (and thus player-controlled); the others wait in cardboard boxes hidden around the level. These soldiers can be switched to for the use of specific items (as each soldier has only four slots for weapons and items) or if the current soldier is hurt. Soldiers also have different "sense" levels, which is represented by a blue circle around their location. If an enemy moves into that circle the soldier will detect them and they will be marked on the map. Thus, scattering your soldiers around a level can create a sort of "net".However, the emphasis is still on single infiltration, and is supplemented by a new form of sneaking: soldiers can "blend in" with other soldiers in similar costume. For example, a standard orange-suited guard could blend in amongst similarly suited guards. This does not work when approaching an enemy of a different class; the same guard would not be able to get past an officer or even a scientist. Suspicious activities (like crawling, sneaking, or pointing a gun) will also cancel blending.

A new map interface is used; different areas are marked on the map similar to Metal Gear Acid. Going to a level takes one half-day, and it switches between day and night. The game starts in November of 1970, and as far as is known there is no "time limit" for missions.

A large part of the system is acquiring and using your comrades. Snake begins alone, but can subdue and drag enemy soldiers back to his HQ (a truck, which his support on this mission drives). Between missions, Snake can manage his comrades, assigning them to different units. The Sneaking Unit accompanies Snake on his mission (or in some cases goes on the mission by themselves) and consists of four four-man teams. One team can be deployed in an area at a time. Spy Units report on events in different areas and will inform Snake of weapons and comrades that can be picked up in areas. Sometimes the spies will bring storyline-important data (the location of a hidden base or the location of a certain individual). Certain spies can also help map out an area and locate items, or reduce the health of enemies in that area. The tech unit researches new gadgets for Snake and his team, much like "Q" from James Bond. Scientists and mechanics are best for this role. The medical unit not only provides medicine, but they also heal units who are recovering from missions (IE at the base when another team goes on a mission).

There are many different types of soldier to recruit in this game. Standard grunts, officers, female soldiers, and elite FOX Unit members. There is even a way to recruit some bosses by using a tranquilizer gun. This contrasts with other Metal Gear Solid games, where tranquilizing a boss would still end up with them dying and the story remaining the same. Soldiers also improve their maximum HP and Stamina levels as they go on missions. There are different levels of proficiency with different weapons (C, B, A, and S, from worst to best) that are ingrained with soldiers (so having a person who is bad at shotguns use a shotgun a lot will not help). A large concern is that if a character dies, they are dead forever (unless you restart a level) so taking care of your soldiers is important.

The storyline has many twists and turns, some of which are important and some of which seem like they fall under George Lucas' Episode II problems (fitting in characters from other parts of the series in a place where they don't really fit).There are references to other games even in the clothes the people wear; the FOX Unit soldiers wear the uniform Snake wore in Metal Gear Solid 3 (with Tiger Stripe camo) and the FOX Unit's leader wears the same trenchcoat that Big Boss and the rebellious members of FOXHOUND wear in MGS1.

There is a great deal of online connectivity in this game. The first kind, for the more casual player, is using Wireless Connections to gain new characters. The network doesn't even need to be connected; the PSP just needs to see that there is a wireless connection there. Some characters are accessible from this process that can't be gained through the normal game, such as members of the Ocelot Unit or KGB. If these characters die, they're gone, and a wireless connection can't be used twice. There are also ways to get soldiers through a GPS Scan (which requires a not-yet-released peripheral) and Passwords (which will be released through "media outlets").

There are online and local death-match modes. A team is taken from the player's single-player game and put online to fight enemies with their equipped items. Some games can result in the loss of a character to an opponent or the gain of a character if you win, while others are just friendly games with no stakes. There is also a "Cyber-Survival" mode in which a squad is sent off onto the Internet and fights other squads automatically. This only requires connection twice: the first time to drop off the squad, and later to pick them up. Once they are input the squad is automatically in the system. Through this, as with the death-match modes, squad members can be won and lost. There is some strategy, essentially focusing on which characters are where and who has what.

The graphics are based on MGS3's graphics, with some minor reductions (no bullet casings, no blood, some less-detailed textures). The cutscenes are done in a stylized comic book manner, similar to the Metal Gear Solid Digital Graphic Novel, and it switches between looking amazing and being annoying.

Overall, this is a fun game to pick up for the PSP. The multitude of characters is a plus, but the squad-based gameplay seems wasted. Early videos showed a team supporting each other directly, with Snake giving commands to his two allies. In contrast, the "one person sneaking and three people hiding" mode doesn't seem as exciting. The storyline was also disappointing in several areas. However, if you are looking for a fun extension of Metal Gear Solid 3 and its online mode, this is a great game.