The origin of wearing birthstones was believed to have been started in India and Babylonia thousands of years ago. The ancients connected gems with planetary alignment. Indian sages believed that gems possessed special powers and these powers could be transferred to the person wearing them. Some of those beliefs are still held by modern day society and helped spur the development of the National Association of Jewelers in 1912. This association helped form the listing we use today, Modern birthstones. 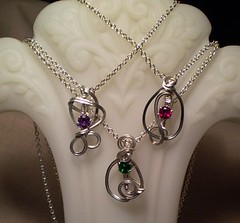 Here is more information about each of the Modern Birthstones:

January: Garnet-Nesosillicate class and considered abrasive. It is believed that the name is derived from a pomegranate – same size, shape and color.

February: Amethyst-Quartz class and considered by the ancients to protect the wearer from drunkenness.

March: Aquamarine- Beryl class and is blue or turquoise blue clear color and the name means “water of the sea”.

April: Diamond- Hardest known natural mineral. The name means “unbreakable, untamed”. Used for abrasive and adornment. The grading of diamonds is by the 4 c’s… cut, clarity, caret and color.

May: Emerald- also Beryl class and is known to have many inclusions. The name means “green” and most stones are treated especially oiled.

June: Pearl- produced within the soft tissue of a mollusk. There are wild and cultured pearls. Most pearls are cultured. Those that are from saltwater are more expensive than freshwater. The name Pearl means “something rare, very fine, valuable and admirable”.

July: Ruby- is from the corundum family. Rubies are pink to bright red- there is no clear definition between a pink sapphire and a ruby. The more expensive pieces are pigeon blood red. Ruby is Latin for red.

August: Peridot is also known as olivine one of the few gems occurring in only a single color. The name origin is uncertain.

October: Opal is a mineraloid gel that is deposited in fissures of almost any kind of rock but it requires water. Australia’s national gemstone is Opal. The word opal means “stone”.

November: Topaz is a colorless gemstone. Impurities give topaz colors such as blue, brown, orange, grey, yellow, green, and pink. Mystic topaz requires a coating treatment for the rainbow effect. Greek “Topazios” is where Topaz gets its name- he was the author of one of the first treasures on minerals and gemstones in 1652.

December: Turquoise is a blue to green mineral and was one of the first to be mined. Turquoise is often treated to enhance the color and durability. Waxing and oiling is one of the oldest treatments. Stabilizing is treating with plastic or water glass. Dying is also a form of treatment. Reconstituting is taking fragments that are powered and bonded to form a solid mass. Irradiation is a treatment the makes turquoise less chalky. Backing is cutting a thin layer and gluing it to a base or stronger material also known as reinforcing.

When purchasing any colored stone it is important to ask what kind of treatment if any the gem has undergone. An item to keep in mind is all gemstones are graded on three components: hue or color, saturation or depth of color and tone or lightness/darkness of the color.

Most popular birthstone jewelry is usually necklace/pendants and rings although bracelets, anklets and earrings are also available for your birth month. 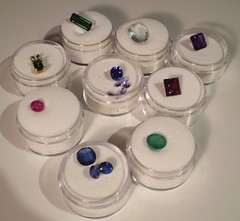 
You Should Also Read:
Gemstones precious vs. semi-precious