Cameos or relief images have been in existence since 3000-3500 BC in the form of Egyptian scarabs and engravings on stone. They were used as an outward appearance as charms or amulets to keep away evil spirits. Through the years Greece and Rome became know for their Cameos with mythological representations on them. Of course Italy is well known for their hand carvings and “Intaglio’s” or opposites of Cameos – these are carvings below the surface rather than raised images. The world center for cameo carving in shell is Torre del Greco. The Renaissance brought about the real popularity of Cameos as they were favorites of more than one Queen as necklaces, belts and on tiaras.

Cameos are etched or carved on a substance such as coral, shell, bone, glass, metals, agate, onyx, sardonyx and even plastic. There is a distinct difference in color from the image to the background. For anyone making an investment in such a piece you are well advised to seek the appraisal of a trained professional. There are new technologies available to ultrasonically carve Cameos into Lucite among other things that can be mistaken for antique or hand-carved pieces. 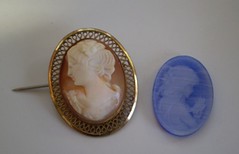 Cameos of ladies gathered, or an image of a woman’s head and shoulders is commonly seen. But many other types of images are also used; such as flowers, angels, and animals besides the mythological imagery mentioned above. Cameos done in black were used during the Victorian Era as mourning jewelry. The time immediately after the passing of a loved one was jewelry-less, but as time progressed, a few months to a year later black Cameos were used as a sign that a person had lost someone special.

Men have been known to collect and wear Cameos throughout history. Napoleon wore a Cameo on his coronation crown during his wedding. Pope Paul II collected Cameos during the Renaissance. Cameos were found on military items such as the handles of swords, helmets and on armor.

Because of the expense of adding a hand carved Cameo to your jewelry collection whether it is from this era or days gone by, the following questions should be those you can answer before the purchase:

What is it made of?

How was it made?

These are clear indicators that will justify the price tag to add a lovely hand carved Cameo to your collection. 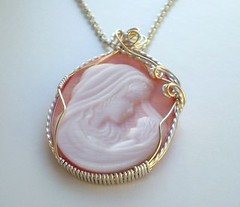