The history of Celtic jewelry is not one that can easily be traced. Over time and influences from various peoples; both invaders and the Christian church, makes tracing the lineage almost impossible. We can garner a bit more information about their symbols and beliefs from the old Celtic myths and legends. A tell-tale facet of Celtic symbolism is that of seeking life eternal and continuity or the use of one continuous line. We know that the Celts believed strongly in the interconnectedness of all life, and that their interlaced patterns reflected this belief. Celts left behind an enduring legacy of almost spellbinding knots and spirals, fierce beasts, and some of them drawn so finely that people called them "the work of angels".

Here are some examples of Celtic symbols that are easily recognized even in jewelry of today:

Celtic Knot:
Symbolic of connectedness, continuity and eternity (no beginning, no end).

Irish Claddagh:
The hand symbolically represents friendship, the crown is symbolic of loyalty and the Heart symbolizes love. Claddaghs are worn on the left hand, facing inward, if your heart is spoken for. If you are unattached, the wearer places the ring on the right hand, facing outward.

Irish Shamrock:
Besides being a symbol of good luck it was purported to have been used by St. Patrick to represent the Father, Son and Holy Ghost. 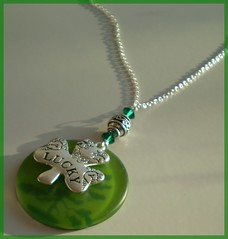 Irish Four Leaf Clover:
A Celtic charm to protect against bad spirits. Some also attach the meaning that each leaf represents: Faith, Hope Love and Luck

Celtic cross:
Strictly speaking, a "Celtic cross" is not just any cross that has Celtic knot work on it. Celtic crosses are, in fact, much older than Christianity. They are equal-armed crosses, enclosed or backed by a circle. The cross can symbolize the four quarters of the earth, and/or the four elements (earth, air, fire, and water). The circle is a symbol of eternity and the path of the sun in the sky. After the introduction of Christianity, it became more common to see the equal-armed cross atop a matching pedestal, which gave it a more elongated form. 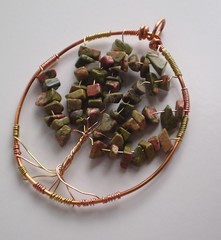 Celtic Tree of Life:
When a tribe cleared the land for a settlement, they always left a great tree in the middle, known in Ireland as the "crann bethadh," or Tree of Life, which embodied the security and integrity of the people. Chieftains were inaugurated at the sacred tree, for, with its roots stretching down to the lower world, its branches reaching to the upper world, it connected him with the power both of the heavens and the worlds below. One of the greatest triumphs a tribe could achieve over its enemies was to cut down their mother tree, an outrage punishable by the highest penalties.


Don't forget to sign up below for my weekly Jewelry Collector newsletter!! I would love to hear from you with any topics you may be interested in!


You Should Also Read:
Chakra Jewelry