Since high school, (many moons ago), I have held a deep interest in Medieval times. I enjoyed reading “The Canterbury Tales” by Chaucer, collecting mythological unicorns and learning about my Celtic heritage. As I began making and collecting jewelry nothing has intrigued me more than chain maille. What wonderful patterns and designs one can make with simple metal rings linked together in a precise manor! Mail (also referred to as maille, chain maille or chainmaille) was a type of Armour used prominently throughout the Dark Ages, High Middle Ages and Renaissance, and reached its apex in Europe, in terms of coverage, during the 13th century, when mail covered the whole body.

Mail was invented some time in the mid 1st millennium BC. It may have been invented independently in East Asia and in Europe. The earliest finds are from a 4th century BC (Rusu, M., “Das Keltische Fürstengrab von Ciumeºti in Rumänien”, Germania 50, 1969, pp.267-269) Celtic chieftain's burial located in Ciumeºti, Romania. It is believed that the Roman Republic first came into contact with mail fighting the Gauls in Cisalpine Gaul, now Northern Italy. The Roman army adopted the technology for their troops in the form of the lorica hamata which was used as a primary form of armour through the Imperial period.

Invented as a form of protection against swords and spears it is uncertain exactly when and where jewelry became known for its use. Chain maille is used in today’s society for butchers protective clothing and for scuba divers protection against shark teeth. Even some animal control officers use mail to protect them against animal attacks. Then, of course, there is beautiful jewelry! 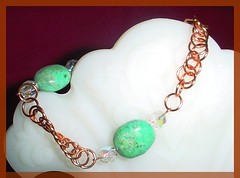 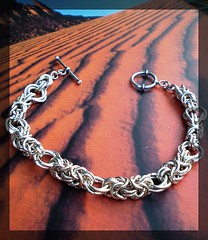 
Chain maille or jump ring jewelry, can be used to create necklaces, pendants, earrings, bracelets, anklets, and headpieces. Silver is the most common material, but gold, brass, stainless steal and anodized niobium can be used. Chain maille jewelry is popular among both men and women, although designs made for women tend to feature more delicate chains and patterns. A round chain, flat chain, or spiral chain are just some of the many possibilities available when making and collecting chain maille jewelry. Beads, gemstones or crystals are often incorporated into chain maille jewelry designs to provide a unique look.