Inside Out - Emmy Rossum

“Slow Me Down” by Emmy Rossum is a majestic carpet ride. It’s the kind of music that pulls you in, settles you securely in the middle of its lushness, and then takes off to magical places previously unknown. For me, it was a momentary escape from an imperfect world, and a fluttering of hope that despite its imperfections it is still a wonderful place to be. Emmy’s vocal gift is unique and her presentation of it in this masterpiece is unforgettable.


Reading about Emmy’s life, you know that it has been its peaks and valleys that have brought her to this new extraordinary height; this particular height where she definitely wants to be, where the vista she now sees before her is one she personally crafted and proudly heralds. She has already had the stellar career as an actress, and though clearly proud of that, it is the music, she shares with us in her public relation releases, that is currently her strongest drive.


When you listen to “Slow Me Down” you will be listening to over a hundred sounds, i.e., parts and harmonies, that are being sung by Emmy. It appears she is pouring her lifetime of being a musical prodigy into this effort.


You can find Emmy’s debut digital album, Inside Out EP, featuring “Slow Me Down” on iTunes July 31st. Inside Out is a wonderful bundle that gives an in depth look into Emmy’s life in a 15-minute documentary, includes two other tunes, along with “Slow Me Down” and a video! Produced by Stuart Brawley for Geffen Records, Emmy and Stuart wrote most of the tunes.


Emmy Rossum, who is a vision of mysterious beauty not at all unlike the character Christine she played in the Phantom of the Opera, or her other serious roles in major motion pictures such as Mystic River, will continue her acting career, but now is the time to treat yourself to this special departure into her music. 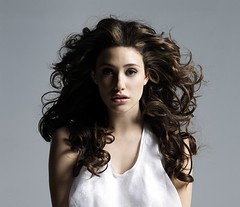