It has been a while since I immediately engaged with an artist in the way I did with the sounds of FEMI. It was only after listening to the entire EP, “Sweet Water Soul”, that I learned that she wrote, composed, and arranged all of the material on the release. That made sense to me because it helped to explain the contiguous flow, the comprehensive interlacing of every note, every instrument, and every rift, to the point of memorable mastery of this special piece of art. 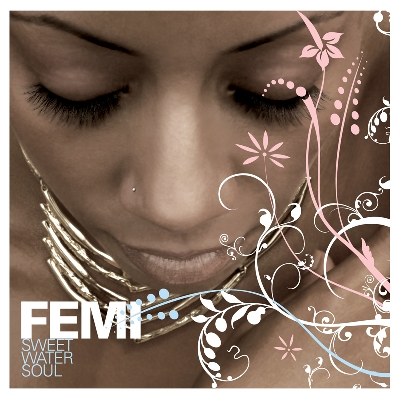 FEMI does put you in mind of those she is compared to; Badu, Arie, Sade, and Jill Scott. She has that fluidity, but she also has that which will separate her into her own unique space. She is FEMI, and her music is FEMI’s.

I found myself thinking about the soundtrack from “Waiting to Exhale” as I listed to “Sweet Water Soul”. It was that type of listening experience, where, one track to the next, your enjoyment builds. The tracks are ‘Imported’, ‘Crush’, ‘If I Knew’, ‘I Want You’, and ‘Pages’. Instrumentally, the repeated flute solos are wonderful, and the expert interjection of the Afro/Caribbean/Latin influence is really nice.

Insight into the EP provided by FEMI tells us that the consistent theme is Water. She explains in her press information that ‘Sweet Water (Rezo)’ is a payer/meditation, ‘Imported’ is about being in a love that surpasses time and space, ‘Crush’ was inspired by the newness of Love, ‘If I Knew’ is about getting the love you prayed for, ‘I Want You’ is like a love letter her lover, and ‘Pages’ is a poem she wrote to herself about self-reflection and self-appreciation.

FEMI, we are told, comes from the Oakland music underground scene where she has something of a celebrity reputation already. Words associated with her presence there include “visionary” and “neo-SOUL soulstress”.

There is total romance to this soundtrack. There is an aura too of a certain type of reverence. I highly recommend it.

Personnel on the production of this noteworthy work are: FEMI and pc Munoz, producers, Willie Samuels, Peter Krawiec and Justin Lieberman, engineers, Justin Liberman again as mixer, and it was mastered by Willie Samuels. The label for “Sweet Water Soul” is Talking House.