Hezekiah Walker Souled Out
After Hezekiah Walker put out the double disc CD “The Essential Hezekiah Walker” I thought…well this is the last Hezekiah Walker CD I will need. It has all the hits on it including my favorite “I Need You to Survive” but I was wrong…way wrong! Long considered one of the greatest when it comes to gospel choir music, Walker and the Love Fellowship Choir have put out another project that will become a staple for choirs for decades to come. Opening with the high tempo, horn infused and bass driven title track “Souled Out!” Walker and LFC give us that signature big choir track that we have all come to know and love from the group. Next they move to “Keep Moving On” where the finger snapping groove usher this track to an easy sing along state. Produced by the incomparable Donald Lawrence, Souled Out offers the trademark Lawrence qualities of good ensemble music that features heart capturing lyrics. Another song of notice is the Ricardo Sanchez “Moving Forward” which speaks of leaving the past behind and moving forward in Christ. Lastly the strong ballad “God Favored Me” ends with the power vocals of Marvin Sapp and the crystal tenor of DJ Rogers and drives home the point that in spite of our problems we have the Favor of God upon us. Listen to Hezekiah Walker’s cd at www.myspace.com/hezekiahwalkerlfc

Kurt Carr & The Kurt Carr SingersJust The Beginning
For years Kurt Carr has been putting out good music and on his 7th project he does exactly the same. Going back to the beginning, hence the title of this project, Carr along with the Kurt Carr singers reunite to give church choirs the high tempo, great sing along tunes that is the foundation for a Kurt Carr project. Opening the 2 disc set is Carr speaking of his life and delivering a great montage of his previous hits including those he has written for others. The next track is a power house joint if there ever was one “Peace and Favor Rest On Us” is an energetic declaration that the favor of God is on his children and we should give him our best praise. The ballad “I Am the One” is a moving ballad that speaks about being the one to say thank you to God for all that he has done for us. Featuring the powerful vocals of Nikki Potts she masterfully crafts the tune into a true heart touching moment all you can do at the end of the song is say Amen. Track after track of uplifting, spirit filled and encouraging tunes take place on the first CD. The thank you theme continues on with the second CD opening with the tune “My Shepherd” which thanks God for providing for us and being a good shepherd over his children. It moves to a brief testimony from a former drug addict who witnessed the shooting death of his friend and was next to be shot but the gun did not go off. It is a short spot on the CD but one filled with so much power about the grace of God. Other songs to check out are “This Little Light of Mine” led by 89-year-old Narcissus Hinton-Brown and “Ten Thousand One Million” led by Vonnie Lopez. Great music for all Mr. Carr…well done. Learn more about Kurt Carr at www.myspace.com/kurtcarrgospel 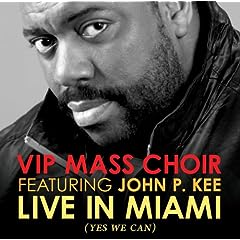 VIP Mass Choir featuring John P. Kee Live in Miami
Live in Miami is a star studded CD that features some of the best voices on the gospel scene. Opening up with a song that seems to single out the Obama campaign “Yes We Can” John P. Kee and the VIP Mass Choir captures the hope and the happiness that many of us felt when President Obama uttered the same phrase. In fact the entire CD reflects the hope and inspiring feelings that loving the Lord can give us all. The sweet ballad “Favor” featuring the beautiful vocals of Lejune Thompson paints the picture of walking in the will of God and receiving his favor because of our obedience. The foot tapping and hand clapping “Winner” proclaims that we are soldiers in the army of the Lord and we are winners. Evangelist Carol Thomas belts this tune out with a fierceness that lets you know this solider means business! The project serves up optimism, hope and faith on every track. I recommend you listen to it if you need your spirits lifted. Other songs to listen to are the bumpin’ “The Glory” featuring Fred Hammond and the ballad “Just for Me” featuring Ernerst Pugh. Check out VIP Mass Choir and John P. Kee at www.johnpkee.com