This guest article was written by Susan Kramer, editor of the BellaOnline Learning Disabilities Site.

In the photographs you'll see an example of the fine lace applied to dresses in the 19th century in Groningen, The Netherlands.

Now that we have an idea of where the province of Groningen is - so far to the north along the sea - it can be noted that the influences on dress reached even here from Paris, France, in the 19th century.

This was a time in history when wealth was worn or ostentatiously shown in other ways in the homes. In other words, beautiful dresses adorned with fine lace were an indication of the family's wealth!

In the views of the dress in the photographs you'll see the lavish application of lace on the edges of the very large and pointed collar.

Starting at the inner neck edge and moving down to the point in front on each inner side, which is well below the waist, you'll see closest to the linen a line of lace that forms little posts that support beautiful scalloped lace.

Moving from the points at the low end of center front up and around the outside of the large collar, that is actually like a shawl, you'll see a doubled version of the lace pattern that was used in the front vertical adornment. 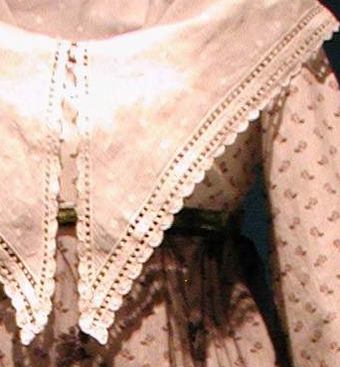 Moving down to the lower edges of the sleeves you'll see scalloped rows of lace again. Every place lace could be applied it was on this dress.

Lots of lace - lots of wealth to be shown!

This dress does not just represent Paris fashion, rather it was like Paris trends were applied on trends north in The Netherlands at the time. To complete the outfits, if it could be afforded, gold jewelry was worn.

This dress is on display at the Groninger Museum in the city of Groningen - the same name as the province. The photographs were taken by my husband, Stan Schaap, on a visit to the museum.

Visit the Groninger Museum website for more beautiful displays of garments. The web site is in Nederlands (Dutch), English and German languages.

Whether you are a museum visitor, or a museum professional, come join the discussion in the Museums Forum!

Who Visits a Museum?

Why Do People Visit Museums?