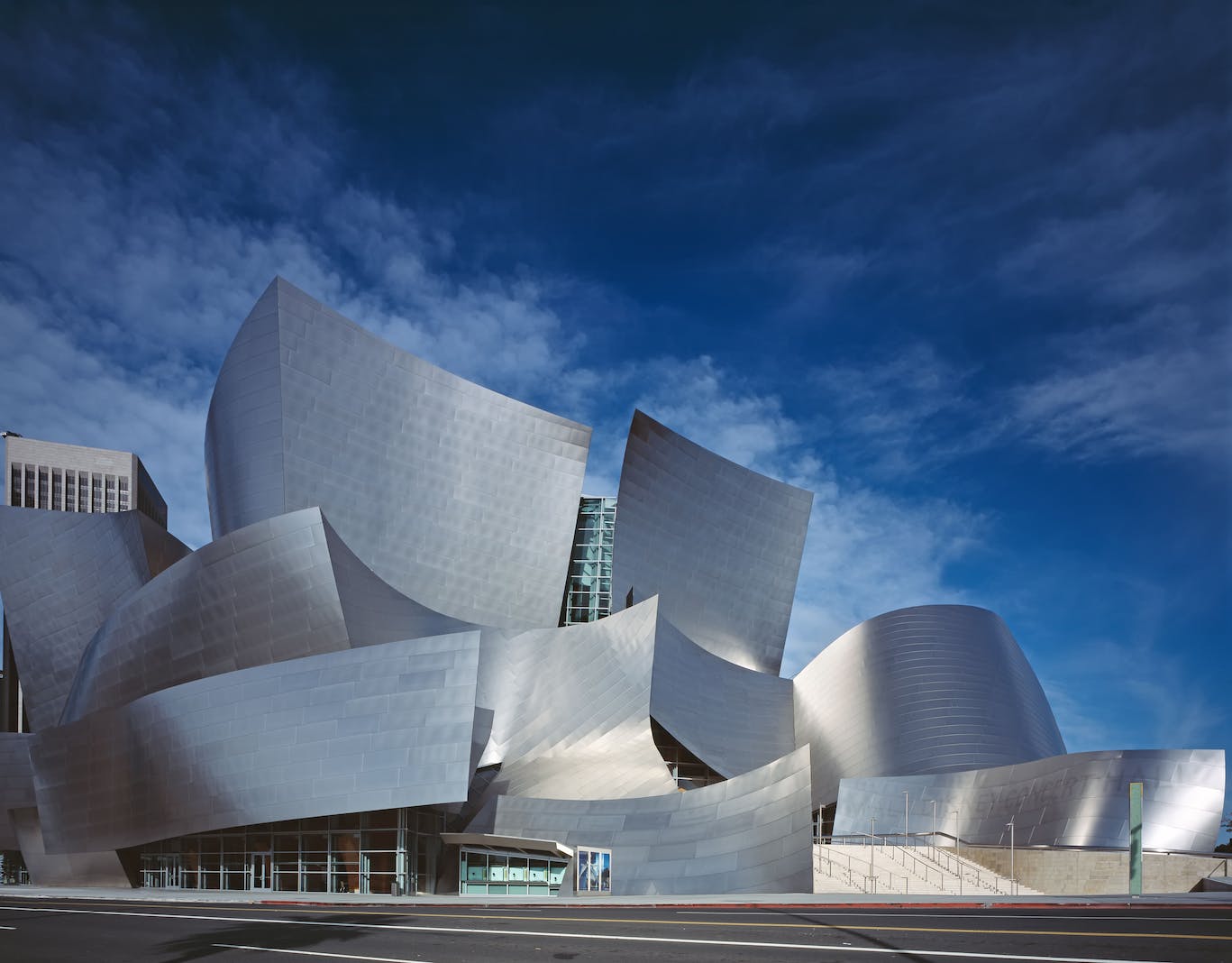 Music and architecture combine to make a big splash in downtown Los Angeles. The city’s Music Center gained a fourth building in 2003 that was christened in honor of Walt Disney. Designed by Frank Gehry, the building is home to both the Los Angeles Philharmonic and the Los Angeles Master Chorale. Attending a concert here is an experience for both the eyes and the ears.

The architect Frank Gehry is known for his unusual and often transcendent forms, which are often completely disassociated from the function of the building. Born in Toronto, Canada, he is now a resident of Los Angeles, and many of his designs have become tourist attractions due to their post-modern design and unusual construction. His work is often controversial but always remarkable.

The exterior of Disney Hall is created from stainless steel pieces which seem to sail above the building in a manner reminiscent of Sydney’s Opera House. These sails, both concave and convex, surround the building; metaphorically, they suggest both movie screens and film reels. In fact, this design proved to be problematic at first; residents complained that the reflection of the Southern California sun from the sails into their buildings raised the temperature, often to an uncomfortable degree. The sails needed to be sanded down to reduce the reflectivity of the surfaces.

The entrance to the building is at the end of stairs which metaphorically raise the concertgoer from the humdrum to the sublime. It’s a fitting first impression for one of the world’s most forward-thinking symphonies. The visitor crosses into a space which is bathed in wood – oak on the floor, Douglas fir on the walls and ceilings, Alaskan cedar on the stage. The auditorium is laid out in a circle surrounding the stage. While there is less seating here than there was previously at the Ahmanson building (and, consequently, ticket prices are unfortunately more expensive), there isn’t a bad seat in the house. Even the balcony has good views of the stage, and for every seat, the acoustics are amazing.

Disney Hall boasts an amazing 6,134 pipe organ, first imagined by Frank Gehry and then brought to reality by organ designer Manuel J. Rosales. Tuning this behemoth required the Los Angeles Philharmonic and the Los Angeles Master Chorale to wait a year before moving in, as the tuning of a single pipe took at least thirty minutes – Rosales needed to walk around the hall and listen to the acoustics from various points to ensure that each pipe was optimized for the auditorium.

Virtual tours of the building are available online. Both audio and guided tours are also offered most days, although these tours do not include the auditorium due to conflicts with rehearsal schedules. A third way to tour the building is offered to concert-goers before select performances.

Of course, concert-goers are able to see Walt Disney Concert Hall. Also expensive, these concerts are magnificent. The Los Angeles Master Chorale and the Los Angeles Philharmonic have regular performances. Their seasons often include performances by international organizations; jazz, holiday, and world music are offered as well as classical. Within the building, the Roy and Edna Disney/CalArts Theatre (REDCAT) also has a performance space; REDCAT’s offerings include theatre, dance, multi-media, film, panel discussions, and literary events.

The arts are alive in Los Angeles, and Walt Disney Concert Hall is one of the central locations. While it is possible to drive and park at the Music Center, one block north, one can also take a Metro train. This is a wonderful way to see the city on a different level, beyond Hollywood and kitsch. Although expensive, it is an important attraction for the City of Angels.