Midnight in Paris – My Haunts

Woody Allen’s film Midnight in Paris captures the magic and magnetism that is Paris. A girlfriend remarked, “You know, I never really appreciated Paris until I saw it.” Even for jaded Parisians it invokes that feeling of nostalgia.

It focuses on a young American couple as their relationship begins to fall apart during a pre-marriage getaway to Paris. Gil is a writer who, enamoured with every nuance of Paris, never wants to leave. Each evening as the opportunity presents itself to abandon his socialite fiancée, he wanders the cobbled streets of the left bank. As the clock chimes midnight he is transported back in time.

As Paris past is interwoven with present day adventures, here are a few of my haunts that are visited along the way: 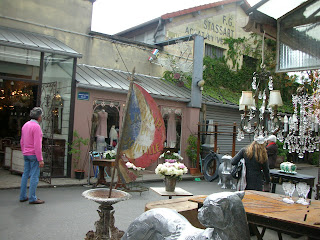 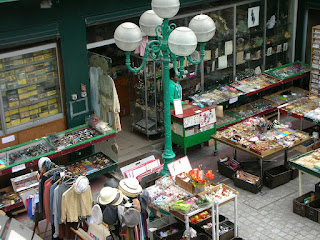 Gil is lured in by a Cole porter song wafting through the Victrola horn. This sprawling flea market takes place from Saturday to Monday in Saint Ouen, a grittier corner of Paris. Walk a quarter of an hour from the metro station (Porte de Clignancourt) through aisles of junk stands and you’ll arrive at the antique markets. Where shopkeepers artfully arrange wears in window displays that trickle out into the streets, hundreds of years of history is at your feet. The wind blows and chandelier beads tinkle like grandiose wind chimes. Everything has its price: for vintage furniture, jewellery, clothing, paintings, posters and knick knacks prices are high even after negotiating, but it’s worth the trip. Give yourself half a day to dream and admire. 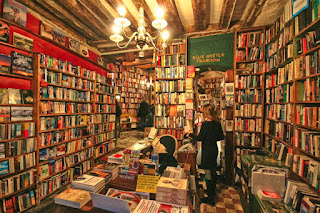 Take the metro to St Michelle to stroll alongside the Seine where book vendors’ stalls line the riverbank across from Notre Dame. Stop into Shakespeare and Company, an Ali Baba’s cave of tempting English language books. As the fever to write is contagious in Paris you could even inquire into the writer’s groups that meet upstairs. I enjoyed the readings, scratching of pens during exercises, and camaraderie at Anna Pook’s creative writing workshop.

Gil says, “You know, I sometimes think, how is anyone ever gonna come up with a book, or a painting, or a symphony, or a sculpture that can compete with a great city. You can't. Because you look around and every street, every boulevard, is its own special art form…” This is ever true in Paris, one of those places you romanticise for years then upon visiting it is exactly what you imagined. Woody Allen’s idealized version is a beauty but it doesn’t compete with the city itself.