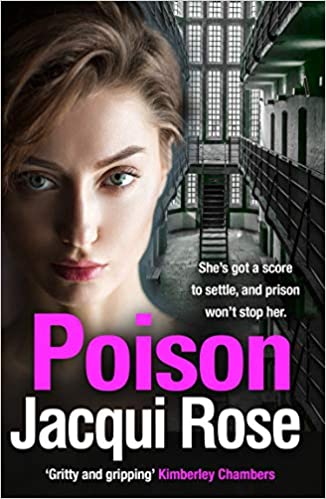 Franny Doyle, a prominent member of the criminal underworld, has been sent to prison after being betrayed by Vaughn Sadler, another member of the powerful criminal underworld. This is almost unheard of in their world, and while Sadler is getting his revenge, Franny is determined to not only get revenge and punish Vaughn, but also to ruin him and his reputation. Poison by Jacqui Rose is the 10th in the bestselling series, and is a hardcore novel filled with characters that aren’t particularly likeable – characters who live up to their criminal tendencies and live the life of gangsters in the gangland. Even though Franny is in prison, she has been living the life so long, that she can most likely accomplish her goals by using people on the outside and calling in favors.

Rose’s writing style will not appeal to everyone – the storyline in this novel is sometimes difficult to follow, especially for those readers who haven’t read the previous novels. There is plenty of profanity and sexual innuendo; typical for characters who live crime-filled lives, and a typical way to show that the characters are low-lifes and fairly despicable. While Rose has developed the characters pretty well, they are not appealing, and some readers will have difficulty cheering on their favorite characters because they most likely won’t have any favorite characters.

While Rose’s gritty storytelling and writing style may appeal to some readers, the previous novels should probably be read before this one to fully appreciate the criminal element on the streets of London, and to fully understand the characters.

The Last Thing She Ever Did Book Review