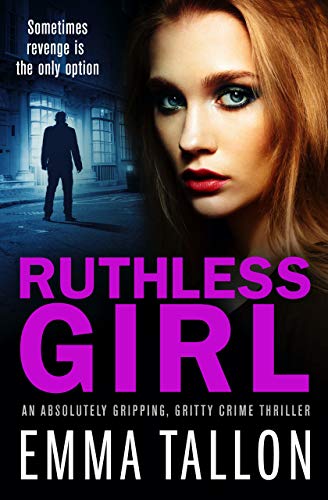 Fans of the Freddie Tyler series by Emma Tallon will be thrilled to read the seventh installment, Ruthless Girl, which finds Anna Davis, girlfriend of powerful gangster, Freddie, who helps run his business as well as her clubs (with her best friend, Tanya) on the East End of London. She has been keeping a secret from Freddie – the fact that she was involved in the killing of the Russian crime boss, Alexis Ivanov, who had been trying to take over Freddie’s territory. His wife, the gorgeous and powerful Sophia Ivanov is set to get revenge for her husband’s death, and contacts Anna to partner up on arms sales. As is typical of the mob, there are some who aren’t to be trusted, and some who may cause danger to both Freddie and Anna.

This well-written series keeps readers on the edges of their seats. In this installment, there are twists and unexpected turns, and at any given time, Freddie, Anna, and Tanya always seem to be in danger. The series is unique because the “bad” guys are the main characters, and readers are in love with them. It’s hard not to want the bad guys to win. Tallon has done an excellent job of developing the main characters, and while the novels can be read as standalone novels, it is recommended that new readers start with the first in the series and read them in order. The storyline of Ruthless Girl is fascinating, and will be very difficult to put down.

This series is addicting, and, although most readers don’t know what really happens behind the scenes in a mob operation, the scenarios ring true. New readers will be hooked from the first book on, and won’t want to miss anything. This novel is highly recommended.