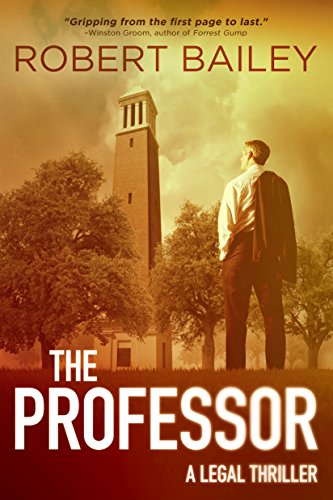 The Professor is the first book in the excellent McMurtrie and Drake Legal Thriller series by Robert Bailey. Tom McMurtrie has been a law professor in Alabama for over 40 years and is loved and respected by most of his students. However, with a dean who doesn’t like Tom, along with a so-called friend who turns on him as a power play and accuses him of misconduct with a previous student, Rick Blake, and a sexual misconduct charge with a female aide (both unfounded and easily explained) Tom is forced to resign. Unfortunately he has also been diagnosed with bladder cancer, so things aren’t good for him. An old girlfriend contacts Tom and asks him to review a case where her son, daughter-in-law, and granddaughter were killed by a truck driver who was speeding to make deadlines imposed by an unscrupulous boss, and whose records were consistently forged to comply with DOT guidelines. Tom hasn’t tried a case in over 40 years and refers this one to Rick Blake who hates him.

Bailey certainly has a gift for storytelling. The books in this series as well as his Bo Haynes series are written so that they are difficult to put down. The characters seem real; McMurtrie is likeable, and readers will be angry at how he is treated by some of the other characters. He has friends, though, and they are also likeable and well-developed. Bailey is also able to capture the ambiance of the south; it is obvious he is familiar with small towns since he grew up in a small southern town and that adds to the charm of the novel. That is not to say, however, that there isn’t suspense. Actually the suspense begins to build in the first chapter and it doesn’t end until the final dénouement. Readers will want to pick up the second installment and read through the entire series – the novels are that good. This novel is highly recommended for anyone who likes a good thriller and likes to sit on the edge.