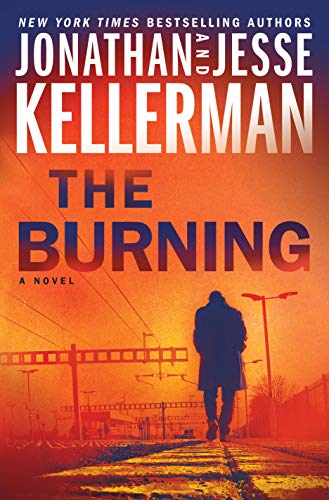 Bestselling thriller author, Jonathan Kellerman, who pairs up with his son Jesse, are the authors of the Clay Edison Series, and The Burning is the fourth installment in the series. The story is set in California where things are shut down due to wildfires in the region and there is essentially a blackout. Clay is sent to the homicide of an elderly millionaire who has an impressive and priceless automobile collection and discovers his brother, Luke’s, car there with no explanation. Clay tries to be ethical, but does all he can to cover up the obvious clues leading to his brother, not sure if his brother is involved. When he learns that Luke, who has been in trouble before and is just out of prison, is actually missing, he investigates every clue to not only solve the murder, but find his brother.

While Clay Edison is law enforcement, he actually works in the coroner’s office and isn’t the lead investigator on the murder. He works to keep himself involved and hopes he doesn’t have to cover up anything to do with his brother. Jonathan Kellerman is a seasoned writer and a skilled storyteller; it seems that his son is also gifted because this series is excellent. The authors have written in such a way that suspense builds throughout the novel and it will certainly keep the interest of those readers who appreciate a good thriller. The characters are well-developed, and Clay and his family as well as his co-workers are well-developed. This book introduces Angela, Luke’s wife, who is a strange one, but one similar to most “tree huggers” most of us are acquainted with.

It is suggested that readers read the previous installments in the series, but this book can also be read as a stand-alone novel. Enough background is included to help readers familiarize themselves with the characters. This is a good thriller for Jonathan and Jesse Kellerman fans.