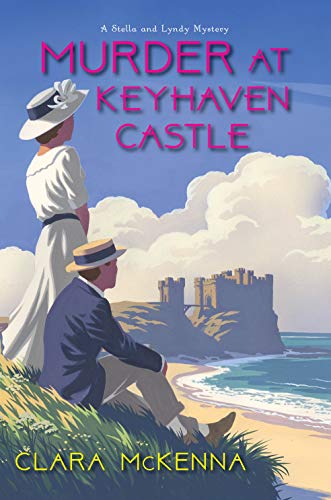 Murder at Keyhaven Castle by Clara McKenna, is the third novel in the Stella and Lyndy Mystery Series. It’s the early 1900s, and the beginning of Edwardian England, where the elite are the very wealthy. Stella has sailed to England and has agreed (or is being forced by her father) to marry Viscount “Lyndy” Lyndhurst due to an agreement with his parents in which his money will bail them out of financial trouble and he will purchase a title. The upside is that Stella and Lyndy are truly in love, and the wedding is just days away; guests are arriving from America. Stella’s father is here from his home in Kentucky, and since he is rude, overbearing, controlling, and difficult, he makes lots of enemies, even in the short time he is to be in England. While in Southampton, Elijah Kendrick, Stella’s father, meets his friends who have come for the wedding, and while picking them up, a jockey is pushed and trampled to death by a horse. Horseracing is what Stella’s father is most interested in, and he is surprised that the murdered jockey is found with a copy of Stella’s wedding announcement in his pocket. There is another murder, and Stella investigates with the help of Lyndy as well as the police. Unfortunately, Stella puts herself in danger, and the suspense builds throughout the novel.

McKenna has obviously done her research, and created a setting for the novel that rings true as to historical facts. Even though the characters are fictional, they are well-developed and their actions seem to fit the times. The story flows and will keep the interest of the readers. Although readers may guess who the murderer is – there are several good suspects - it is not actually revealed until the dénouement at the end of the novel.

Anyone who enjoys a British setting and a good mystery will want to read this novel; although it can be read as a standalone, readers who haven’t read the previous novels in the series will want to pick them up. This excellent mystery is clean, has no violence, sex, or language and is suitable for all ages.