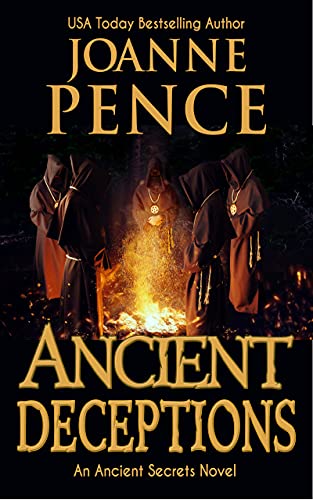 Ancient Deceptions is the fourth installment in the Ancient Secrets series by award-winning author Joanne Pence. Having read Pence’s Angie Amalfi cozy novels, this novel was unexpected, as it is totally different from that cozy series. Michael Rempart, who is a well-known archeologist and the protagonist of the series, sees a picture of his long-lost love who abruptly left him years before with no explanation. He has been searching for her for years, and learns she is living in St. Petersburg, Russia and near a dig in the Ukraine that he has been invited to participate in. Of course he packs up and travels to the Ukraine and the dig where the head professor is sure they have discovered an ancient chapel. Because of Michael’s fame, he is given a cottage to stay in near the dig and sees the strange happenings there. A student goes missing, and the archeologists discover he has been brutally murdered and his organs removed. Professor Kovak who is in charge of the dig, doesn’t want the dig shut down since he is trying to make himself famous, has his students and the volunteers lie about it, and they proceed. But when there are more murders and participants falling asleep and waking up weak and frail with cuts on their bodies, Michael suspects there are demons and possibly vampires in the area. One of the characters is Bethany, who comes from a small Mormon (LDS) community who is trying to find her older sister, Rachael. She suspects Michael knows what happened to Rachael and travels to the dig site to find out. There are multiple plot scenarios that are interesting in this novel.

This supernatural thriller isn’t particularly believable, but is entertaining and a bit scary. The story is quite interesting, and the characters are well-developed. Pence needs to do some further research , however, since her knowledge of The Church of Jesus Christ of Latter Day Saints (she refers to as Mormon or LDS) is waning. Bethany, who is a member from Idaho, drinks coffee and liquor at the cottage which is strictly forbidden; she most likely wouldn’t indulge. It’s obvious Pence isn’t aware of that and makes Bethany seem like a character that isn’t believable and doesn’t fit in the novel.

The vampires in the novel don’t fit most readers’ idea of what vampires should look and act like (made famous in Bram Stoker’s novel, Dracula), but they are scary nevertheless. This novel has a lot of blatant violence, which may turn off younger readers. Pence is an excellent writer, but this novel won’t appeal to everyone.