The surrealists are perhaps best known for portraying the unconscious, but artists of the 19thc preceded writings by Sigmund Freud and his influence on 20thc cinema and art.

French artist Gustave Moreau's painting "The Apparition" or "Dance of Salome" (1874-1876) shows a vision of the stepdaughter of Herod the Great where her request for the head of John the Baptist on a plate perhaps comes to fruition. John vehemently disapproved of the marriage between Salome's mother Herodias (a Jewish princess) and Herod.

German artist Max Klinger's etching and aquatint "The Philosopher" (1885-1900) from the series "On Death II" is a dream (referencing mirror of the soul) where a philosopher touches his reflection in a mirror.

Sigmund Freud's book "The Interpretation of Dreams" (1899-1900) was extensively read and the surrealists' fascination in silent movies and detective stories subsequently led to references of popular culture in their work.

French post-impressionist artist Henri Rousseau's "Sleeping Gypsy" (1897) is a dream of a place where man and nature can peacefully coexist.

A fine example by de Chirico is "The Melancholy of Departure" (1916), cubist in nature, painted during a difficult time in his life, having moved from his native Greece to Italy, and suffering a nervous breakdown.

Belgian artist Rene Magritte's "Key to Dreams" series (1927) pairs words and images, mostly misnaming objects except for 'valise'. Written in English (unusual for the artist) as it was produced for his first solo show in 1936 in NY.

Spaniard Salvador Dali named his hyper-real artistic technique 'concrete irrationality'. Perhaps the most well recognized surrealist painting is his "Persistence of Memory" (1931) which Freud agreed it represented the unconscious. (Andre Breton threw Dali out of the Surrealist group.)

Mexican artist Frida Kahlo painted "El Sueno" or "The Dream" (1940) AKA "The Bed" where she incorporates sleep, death, and dreams.

One of my favorite female artists across all genres is British born Mexican artist Leonora Carrington. Her "And Then We Saw the Daughter of the Minotaur" (1953) is a magical imaginary setting with a seated cow and green moth. Or is it a flower?

Swedish psychologist and psychoanalyst Carl Jung encouraged American painter Jackson Pollack during his Jungian analysis in NY to draw his dreams. This is evident in an abstract self-portrait alongside a black and white depiction of bodies in "Portrait and a Dream" (1953).

With the beginning of WWII and the Nazi occupation of Paris, writer
Andre Breton, artists Max Ernst, Yves Tanguy, and others fled to the US, influencing modern art. 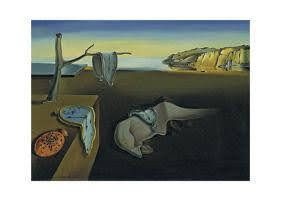