It is not a question as to whether historically there were talented women artists; but rather, what was documented. I will discuss women artists; some who may be unfamiliar to readers.

Did women contribute to cave art? Absolutely! If they were not the primary artists because of cultural restrictions, they may have served as assistants.

Italian Mannerist artist Lavinia Fontana was trained by her father and was successful as a painter of large portraiture, mythology, and religious subjects. Her "Self-Portrait in the Studio" (1579) was painted when she was only 27 years old.

Emerging from the 17thc as one of the most prominent Italian Baroque artists is Artemisia Gentileschi, painting in the style of Caravaggio with the use of light and darkness.

As the daughter of the painter Orazio Gentileschi, she developed her own style and repeated a theme in four (4) separate paintings.

In her own way of dealing with a past trauma, she painted "Judith and Her Maidservant with the Head of Holofernes" (1623). Portrayed in this painting is the moment following Judith's beheading of the Assyrian general Holofernes.

This painting along with two (2) other self-portraits were in the exhibit, "By Her Hand: Artemisia Gentileschi and Women Artists in Italy 1500-1800" at the Wadsworth Museum in Hartford CT, until January 2022.

In this landmark exhibit was Gentileschi's "Self-Portrait as a Lute Player" (1616-1618) from the Wadsworth and from Sofonisba Anguissola is "The Artists' Sister in the Garb as a Nun" (1551).

French portrait painter Elizabeth Vigee-Lebrun's "Marie Antoinette with a Rose" (1783) is part of the collection of the Palace of Versailles.

Perhaps one of the most beloved American women artists is Mary Cassatt. She lived in Paris for much of her adult life, was a friend to Edgar Degas, and she was the only American artist to exhibit with the Impressionists.

Cassatt is best known for scenes from the everyday lives of mother and child, as seen in "The Child's Bath" (1893) from the School of the Art Institute of Chicago.

Camille Claudel was first hired as an assistant to French sculptor Auguste Rodin, then she became recognized in her own right for figurative work in bronze and marble. The couple was romantically involved and perhaps their relationship inspired her sculpture "La Valse" or "The Waltz" (versions produced from 1889-1905).

Suzanne Valadon, mother to French artist Maurice Utrillo, was the first woman painter admitted to the Societe Nationale des Beaux-Arts. One of her most recognized works is "The Blue Room" (1923). 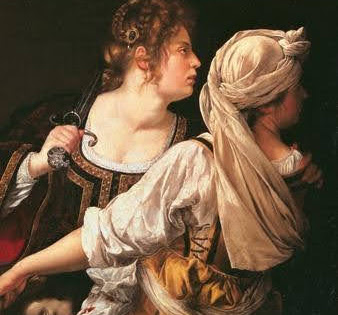 Judith and her Maidservant by Artemisia Gentileschi