The Apocalypse in Art

The final destruction of the world has been represented in many works of art. Considering the current unsettling world affairs, I think it important to experience catharsis by sharing the frustration and pain of these artists.

The Apocalypse is mentioned in the Book of Revelations from the Bible. We'll supposedly know when the bells of Heaven are ringing.

During the Middle Ages, Hieronymus Bosch painted the extraordinarily complex triptych "Garden of Earthly Delights" (1490-1500), using symbolism for sin, greed, punishment, and Hell. Did he predict the fate of humanity?

Michelangelo Buonarroti's "The Last Judgement" (1536-1541) is a fresco on the wall of the Sistine Chapel in Vatican City, Rome. It tells the story of Christ deciding the fate of humans. Who is sent to Heaven or Hell?

Spaniard Francisco Goya made a series of eighty-five (85) etchings known as "Disasters of War" from 1810-1820, as an interpretation of the Peninsula War.

During the 19th century in the United States, the Hudson River School artist Thomas Cole painted the series "The Course of Empire", a historical cycle of the rise and fall of a nation. "Desolation" is the fifth and last of these landscapes.

I can't discuss devastation, death, and Hell without mentioning the black paintings by Ad Reinhardt, Kazimir Malevich, and Mark Rothko.

From the depths of grief and darkness, perhaps it was the artists' hope to erase history and the lives of the oppressors.

Ad Reinhardt's "black paintings" or "ultimate paintings" were a series from the mid-1950s-1967, the year of his death. He declared they were the "last paintings".

Malevich died at age 57 in Leningrad, Russia. His ashes were buried in a grave marked with a black square.

The lyrics to American singer, songwriter, and poet Jim Morrison's "This is The End" – "Beautiful friend, this is the end, My only friend, the end". His words and music have lasted beyond his lifetime, since Morrison would die at age 27. 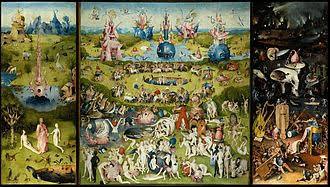 "The Garden of Earthly Delights" by Hieronymus Bosch. Courtesy of Wikipedia.