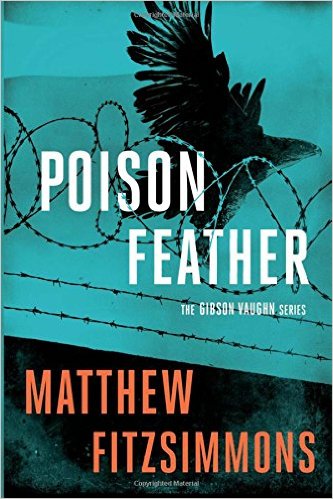 The second book in the Gibson Vaughan series by Matthew Fitzsimmons, Poisonfeather finds Gibson repaying a debt he feels he owes to Judge Hammond Birk, who helped him in his youth. Birk invested heavily with Charles Merrick, a billionaire, who cheated thousands of unsuspecting investors out of their savings. Even though he lost most of his money when convicted of fraud and sent to prison, he has intimated that he has millions stashed in offshore accounts. Since Merrick is soon-to-be-released from prison, hundreds of those who were cheated are trying to find his stashed money. Judge Birk is one of the victims, and feels guilty for talking friends and relatives into investing with Merrick. Gibson has nothing better to do, and begins an investigation. He is assisted by an ex-con, as well as a strange bartender, a Chinese spy and other assorted interesting characters.

While readers were left hanging in the first Gibson Vaughan novel, The Short Drop, it was expected that some issues would be resolved. However, this novel left more issues hanging, and while the main story is explained, most readers are probably left irritated and frustrated because the book doesn’t explain what the readers want to learn from either novel.

The book has plenty of twists and turns, and the story is basically pretty good. Gibson, et al are constantly in danger, and there is plenty of suspense which builds throughout. Vaughan’s scenarios aren’t particularly believable, and he sometimes takes on a “comic book” guise where he is super-human.

After reading this novel, and finding that there are so many hanging issues, many readers will choose to ignore the subsequent books because nothing fits into place. And even though the story is good, some of the issues are a bit confusing.

Because there are hundreds of excellent suspense/thriller writers out there, this may be one that can be skipped since there are too many things that aren’t explained. We still don’t know whether his partners from the first book are alive, for instance, and having to wait through several books certainly isn’t what readers want.