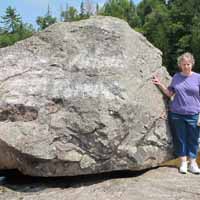 Despite its antiquated language, Come Thou Fount Of Every Blessing has long been one of my favorite hymns. But there was a verse, or really one word, in the hymn, I have never understood. Ebenezer. Every time I sang that line, I thought of the name of a person, such as Ebenezer Scrooge, or? Well really, that?s the only Ebenezer I know. So I went on and concentrated on the meaning of the rest of the hymn.


"Here I raise my Ebenezer;
Here by Thy great help I've come;"
Written by Robert Robinson in 1758

What I should have done when I first heard the hymn, I have done now. I searched for Ebenezer in Scripture. It's the name of, not a person, but a rock.

Old Testament Israel had begun adopting some lifestyle choices of pagan nations surrounding them. Knowing these choices were not God's will for them and would prove disastrous, Samuel challenged the people of Israel to prove their loyalty to their Lord by ridding themselves of all reference to foreign gods. They needed to put their One True God in his rightful place and serve him only. Samuel summoned them to Mizpah (north of Jerusalem), where they fasted and admitted their sin. Samuel prayed and prepared a sacrifice for the people.

When the Philistines (their enemies) learned Israel had assembled, they prepared to attack. Hearing this, a frightened Israel called on Samuel to petition the Lord on their behalf. The Philistines approached while Samuel sacrificed a burnt offering. God answered Israel's call for help. Scripture says God thundered so loud that it panicked the Philistines, and Israel (who weren't afraid) easily overcame them.
To commemorate the victory, Samuel took a stone and set it up, naming it Ebenezer. He said "Thus far has the Lord helped us." 1 Samuel 7:13 NIV Ebenezer means stone of help.

Do you remember a time when the Lord helped you? A time when everything looked bleak, and victory impossible? When trouble arrives now, do you go back, in your mind, to that place and recall God's help? If you are a believer in Jesus Christ, God has saved you. There may be a day or a place where the Lord turned your life around. Since that time, there may be other times you remember when God answered your prayers.

Samuel set a stone named Ebenezer to remind Israel of God's care. Where is your Ebenezer?