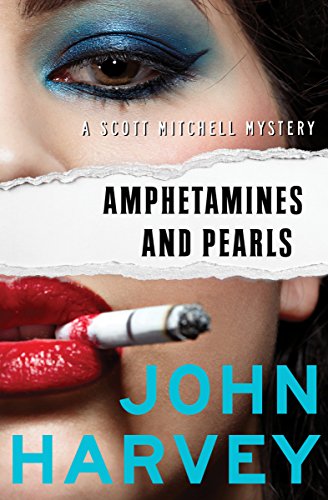 Amphetamines and Pearls is the first book by award-winning author, John Harvey, in the Scott Mitchell series. It was first published in 1976, before Harvey’s Charlie Resnick series, which have all become bestsellers. Harvey’s debut novel begins when Scott Mitchell, PI and alcoholic, gets a message from his former lover, Candi Carter, begging for help. Since Candi changed her name from Ann to Candi,she has become a famous singer. The next day he goes to her apartment to find out what he can do to help her, and discovers she has been violently murdered. While attempting to leave the apartment, he is beat up, and when he comes to, is beaten again by two cops who arrest him for the murder.

Although Mitchell is considered one of the best private detectives in England, he is constantly getting beat up or involved in violent altercations. Harvey includes enough violence for anyone who goes for that kind of thing, and a real-life detective would probably not survive what Mitchell goes through. Although Mitchell is good, he has a problem with being careful, and dives into situations without fore-thought or advance planning. It’s a miracle that he survives.

Harvey’s style is one that will appeal to those who like action – his novels are filled with it – and are willing to believe that their hero will survive anything. There are dozens of ups and downs, and readers won’t really have an idea of the murderer’s identity until the very end of the book. Amphetamines and Pearls can be considered a hard-boiled crime novel, and will be especially appreciated by those who are into that genre. This particular novel is short – only 144 pages, so it is a fast read. It is well-written, and the characters are well-developed.