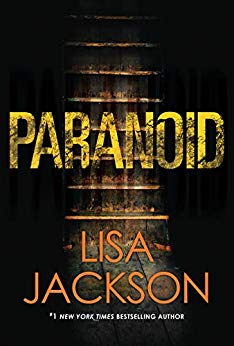 Paranoid by Lisa Jackson is a spellbinding thriller set in Edgewater Oregon. 20 years prior Rachel Gaston (Ryder) went to an old abandoned warehouse with her friends to play a shooting game. None of the guns they fired had real bullets, and nobody was supposed to get hurt. Unfortunately, when Rachel fired the gun her step-brother, Luke, had given her, Luke fell and bled to death. Rachel’s step-father, a police officer, was first on the scene and in the end, Rachel was found not guilty. Most of the people in the small town still think she is guilty, and when classmates who testified for her during her trial were subsequently found murdered after 20 years, Rachel’s ex-husband, Detective Cade Ryder, steps in and tries to tie the murders to the incident. Someone is after Rachel and others who were there at the abandoned warehouse, and Cade must work fast to find the murderer before more murders occur.

Lisa Jackson is a bestselling author for a reason; she can tell a story and keep the audience’s attention. Her novels are well-written, concise, and fascinating - Paranoid is no exception. Jackson develops her characters so that readers can relate, and they seem real. The scenarios in this novel are believable, and the twists keep readers on the edges of their seats. Of course, there is a surprise ending, and Jackson is a master at building suspense to a sometimes shocking dénouement.

Thriller aficionados will love this novel, and will appreciate Lisa Jackson’s expertise in putting together a memorable thriller. Highly recommended. Fans of Lisa Jackson will savor this novel, and those who are unfamiliar with her writing will become loyal fans.