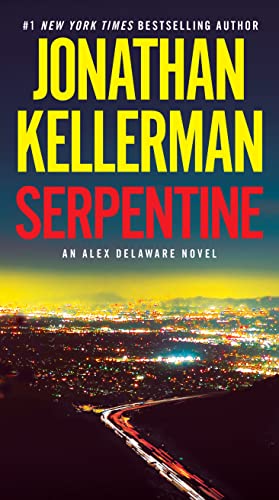 It’s amazing that Alex Delaware fans can enjoy the 36th installment of the Alex Delaware series by Jonathan Kellerman; most fans have read them all, and it seems that Kellerman can’t write a bad novel. In Serpentine we are reminded that money yields power, and Milo Sturgis, who calls Alex in on some of his cases, is assigned to a cold case where a very rich girl wants answers on her mother’s death more than 30 years prior. This girl’s mother was found with a gunshot wound to her head in a Cadillac owned by a rich boyfriend. The case was never closed, but it wasn’t solved either. As Milo (one of the best LA homicide detectives on record), with the help of his best friend, Delaware (a brilliant psychologist), they began chasing clues that may have relevance to the case and may lead them to solving it. Alex and Milo find they and some of the characters are put in danger when this case is opened, and it may not be seem worth solving due to the ramifications on the rich who are involved, what they entail and who they expose.

Kellerman fans know these characters and they are beloved and considered real people with flaws like real people have. Milo Sturgis is a gay, overweight man who dresses in atrocious attire; he is almost opposite of Alex who is in shape and is about as opposite to Milo as he could be. They work well together, and have solved dozens of cases in the past. This one is different though because most of the people who could help are dead and most clues have long disappeared.

While not a classic, this is a great novel for fans of the Alex Delaware series and is definitely worth reading.