The Devil and Hell in Art

With life's uncertainties it is natural to question good vs bad, causing us to look introspectively at our lives and choose right over wrong. I will discuss artists who reflect on this subject through their art.

By the end of the Middle Ages in the 12th c, the devil and hell were merely myths. The Fourth Lateran Council of 1215 affirmed the spiritual nature of angels and recognized Satan as a fallen archangel.

In chapters 2 and 3 from the Book of Genesis from the first book in the Bible, Satan is disguised as a snake and convinces Eve to eat the forbidden fruit from the tree of good and evil.

The Devil rarely appeared in art during the first millennium in Christianity. Satan was the enemy of Christ. The Christian devil was influenced by Europe's ancient pagan cultures and folklore.

The Devil goes by many names: Satan, Lucifer, Beelzebub, Belial, and Asmodeus (in the Bible and Apocrypha).

Early Netherlandish master Hieronymus Bosch was born during the transition from the Middle Ages to the Renaissance. He was familiar with the Visio Tungdali, a 12th c handwriting describing the journey through Hell.

The "Garden of Earthly Delights" (1503-1515) is a nightmarish look into what seems a surreal world. A caricature from "Garden" is the 'Devil on Night Chair' who represents evil and a warning of the apocalypse.

German Renaissance artist Albrecht Durer's "Knight, Death, and the Devil" (1513) is one of three master engravings "Meisterstiche" where the Devil holds the hourglass.

Netherlandish Renaissance artist Pieter Bruegel the Elder's painting "The Fall of Rebel Angels" (1562) exemplifies the theme 'good vs evil' with the Archangel Michael (clad in gold armor) 'beating back' the rebel angels from Heaven.

French sculptor Auguste Rodin admired Gothic and Italian Renaissance art. His first major commission was "The Gates of Hell," considered 'modern realism', which he worked on for 37 years until his death in 1937. It was last exhibited at the Place de l'Alma in Paris by Rodin.

Its monumental door was decorated with low reliefs inspired by Dante's "Divine Comedy." Rodin ignored 2/3 of Dante's poem and concentrated only on the dark side (Hell). The "Thinker" was a portrayal of Dante.

So, when you hear someone say, "Go to Hell" or "The Devil made me do it" it may be touching on the dark side of their soul. [Food for thought.]

One of his intricate black and white pen drawings is "Devil and the Goat" (shown below). 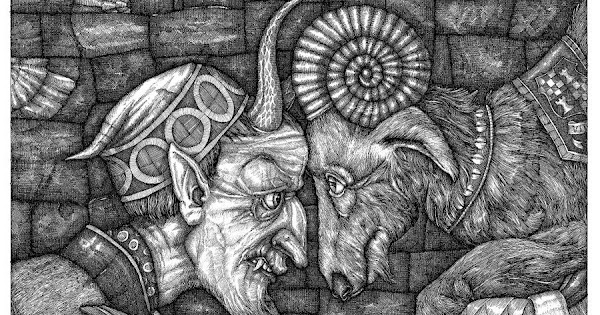 Illustration by Andre Sobas with permission from the artist.

You can browse this site for more fine art drawings by Andre Sobas.
https://fineartamerica.com/profiles/andre-sobas