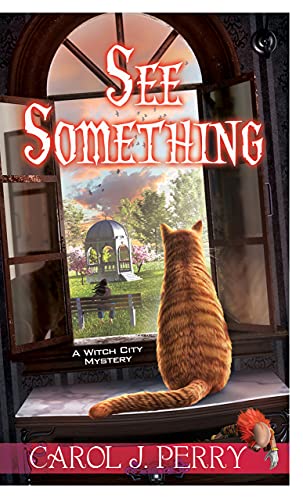 See Something is the 11th novel in the popular Witch City Mystery series by Carol J. Perry. The protagonist, Lee Barrett, who has been a field reporter for the local station WICH-TV, has been promoted to program director. On her way to work she sees a woman sitting in the town square and on her way home sees that the woman is still there; Lee learns that she doesn’t even know her name and has nowhere to go. After work, Lee takes her home, and that is where the mystery begins. Pete, Lee’s detective boyfriend, is investigating a murder, and Lee wants to help him, since her Jane Doe may have amnesia because she witnessed that murder.

Just like the previous novels in this series, this one is well-written. There is some suspense, but not as much as expected, so some may say that the novel doesn’t move fast enough. However, the characters are well-developed and even those new to the series who are reading this book as their first, will know what’s going on and will like the characters and want them to find the killer so that Salem is a safe haven again. As always, this series has no graphic sex, violence, and language, so it’s suitable for all ages. Teens will enjoy it as well as adults.

This series is fairly typical in the cozy genre, and even though Lee isn’t in the culinary business, there are dozens of references to food, which makes readers hungry and makes them yearn for the recipes. Perry includes several good recipes at the end of the book, so culinary mystery aficionados will be satisfied. Actually, the recipes in this novel sound mouthwatering and are definitely worth trying.

This is a fun novel and a fun series.