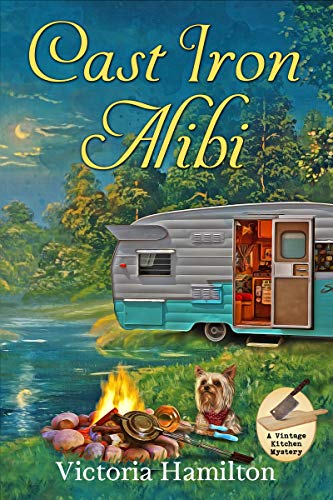 Cast Iron Alibi is the ninth installment in the Vintage Kitchen Series by Victoria Hamilton. This fun cozy finds Jaymie Leighton excited for a weekend with college roommates who plan to go camping together. Unfortunately, there is a man who thinks of himself as a hot lover and has been after one of the girls; he is found murdered. Since one of Jaymie’s friends is the murder suspect, Jaymie needs to work hard to investigate and find who the murderer really is. It stands to reason that one of the roommates is most likely the murderer, and there is plenty of bickering and name calling, almost worse than when they were in college, but is one of these girls really a murderer?

Anyone familiar with this series knows that Hamilton is an excellent storyteller, and this novel is well-written and indicative of her writing skills. Hamilton is also good at developing her characters, and throughout the series readers have become enamored with the main characters, especially Jaymie, the main protagonist. There are also secondary characters who have a prominent place in the novel, and they are good characters who seem to be just like real people we may know. Hamilton has a way of building mild suspense in this novel, and it keeps readers wanting to read rather than putting the book down.

Recipes are essential to a good culinary mystery, and this one includes a good camping recipe in keeping with the camping theme. This is a fun addition to the series and will be enjoyed by all readers.