It is probably human nature to look forward, not up. Pity. Illusionistic fresco paintings are a wonder to behold. From ancient rock art, to churches, public buildings, and private residences, I will discuss why.

One of the oldest known rock art on Earth (with a confirmed date) is 28,000 years old from Australia. The decorated fragment found may have been part of a larger ceiling artwork (unconfirmed).

Italian artist and architect Giotto is best known for his wall and ceiling frescoes of the Scrovegni Chapel (Arena Chapel). Painted in 1305, this small church is adjacent to the Augustinian monastery.

In northern Italy, during the Baroque era, artist Andrea Mantegna was court painter to the Gonzaga family from Mantua.

Mantegna painted the bridal chamber (aka camera degli sposi) in the Ducal Chamber. These frescoes include a ceiling with the illusion of a window or oculus as if to 'open' the sky.

This is the first time since the Roman villas to see examples of illusionistic ceiling painting with visual effects of foreshortening, perspective, and trompe l'oeil (trick of eye) creating depth on flat surface.

When I visited Rome in the 1980s, the ceiling of the Sistine Chapel was being restored, and so scaffolding covered my most anticipated takeaway – the hand of God (almost) touching Adam's.

The first major commission for Italian artist Antonio Allegri da Correggio was the ceiling of the private dining room of the Convent of St Paul in 1519. The room is known as camera di San Paolo.

The Jesuit order of the Catholic Church was founded in 1540 as counter-reformation and a leading patron of the arts.

In the 16th and 17th centuries, Jesuit churches featured ceiling paintings to inspire a sense of God's presence. The ascension of Jesus taken from the Bible was shown with architectural elements to appear as though heaven was a continuation of the building (quadratura).

The ceiling of Gesu in Rome (the mother church of the Jesuits) was painted by Giovanni Battista Gaulli, protege of Bernini. Scenes of saints and angels in adoration of Christ can be seen from below.

The only known ceiling painting by artist extraordinaire Caravaggio is in the Villa Aurora, Rome. Painted in 1597, it depicts scenes of Roman gods Jupiter, Neptune, and Pluto.

The villa was recently for sale by the owner for $546 million. (There were no bids.)

On Versailles' vaulted ceiling are paintings on the theme "The Apotheosis of Hercules" (1736) by Jean-Baptiste de Champaign.

Perhaps the most recognized of the illusionistic fresco painters is Venetian artist Giambattista Tiepolo, with his colorful palette, especially his use of ultramarine, azurite, and Egyptian blue.

Tiepolo is considered the greatest decorative painter of the18thc in Europe. In the 1750s he was asked to decorate the ceiling of the Imperial Hall (Kaisersaal) at the palace of Carl Philipp von Greiffenclau of Wurzburg, Germany.

Further commissions for Tiepolo would be for Villa Valmarana and Villa Pisani in Veneto, Italy, as well as decorating three ceiling frescoes for King Charles III at the Royal Palace in Madrid, Spain. 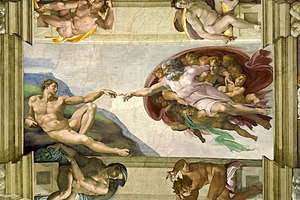 "Creation of Adam" from the Sistine Chapel by Michelangelo. Photo courtesy of Wikipedia.