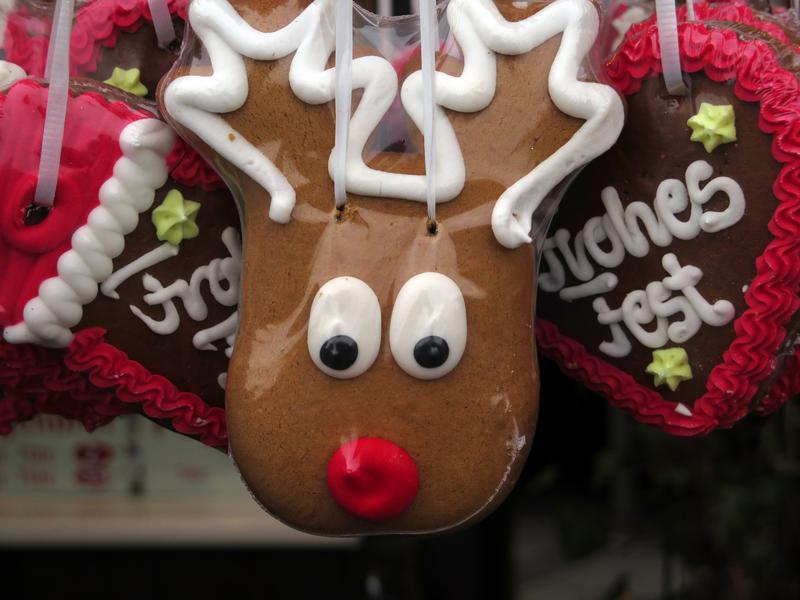 In Germany a Weinachtenmarkt, Christmas market, seems to spring up in nearly every town and city. Some are small and open only a couple of weekends. Some have hundreds of booths and last a whole month. But nowhere in Germany is there a greater variety of these than in Baden-Württemberg, the corner of the country that includes the Black Forest.

Stuttgart, the region’s major city is a good place to begin, and makes a convenient base for the northern markets, which are easy to reach from its Hauptbahnhof (main train station). Its Weinachtenmarkt is one of Germany’s biggest and oldest, with nearly 300 stalls and dating back at least three centuries. The market begins a block from the railway station, in the wide Schlossplatz, under a majestic Christmas tree that towers over a children’s Ferris wheel whose cars are giant Christmas tree balls.

Beyond this area designed especially for children, the main market stretches along pedestrian streets and through squares, under the towers of a castle and a Gothic church, and into the big market square. Each booth is in a charming little wooden cabin, and in Stuttgart these are each topped by a display – a village scene, a manger tableau, woodland animals – each in fresh evergreen boughs. These join with the fragrances of gingerbread and hot mulled wine to scent the air.

A short subway ride leads to Ludwigsburg, where a former prince built his splendid baroque country palace. In a post-card perfect square surrounded by mansions of court followers is one of Germany’s loveliest markets. This one is limited to specialty goods, most of them handmade and no two booths are exactly alike. Traditional foods from other parts of Germany – lebkuchen from Nuremburg, Dresden stolen – and fine crafts take on an almost regal air in these royal surroundings.

Visiting nearby Esslingen is like stepping straight into the Middle Ages. In a setting of original Medieval half-timbered buildings – the largest intact collection in Germany – the Mittelaltermarkt that fills the Rathausplatz re-creates street markets in the Middle Ages. The tented booths, authentic dress of the exhibitors, even the foods cooked over open fires and the entertainment by minstrels and jugglers are right out of the 14th century. See it at night, when the square is lit by fires, torches and candles. Kids can ride a centuries old original hand-operated Ferris wheel and play medieval games while shoppers admire the one-of-a-kind works by blacksmiths, weavers, silversmiths, woodcarvers, basket makers and potters.

Tubingen’s market, strictly speaking, isn’t a Weinachtenmarkt, but a city-wide chocolate festival called ChocolART. Tents line the winding stone streets between Medieval and Renaissance buildings and the fragrance of chocolate pervades the air. Chocolatiers from all over the world assemble here with their most beautiful holiday treats. Along with luscious truffles, pralines and bars of every shade are dipped candied fruit, chocolate covered liebkuchen, molded St Nicholases and chocolate reproductions of everything from salami to pizza. Steaming cups of hot chocolate replace the usual gluhwein.

In the fairy tale setting of the Hohenzollern Castle, the courtyard and Great Hall sparkle with a Christmas market for two weekends each December. Shuttle buses carry market-goers up the steep mountain to the castle gates, where vendors sell hot wine and grilled sausages in the outer courtyard. Carefully selected local crafts are displayed in cabins beneath the tall walls of the inner court and inside are more craftspeople, each with a different specialty. Many use local materials – wool from their own sheep and alpacas, wood from the Black Forest – and the crafts and designs are among the most original we saw.

In the little Black Forest town of St Blaisen, the Christmas market fills the square in front of the immense cathedral, far larger than we’d expected for a small town. As we arrived, a local choir was singing Christmas carols, and business seemed to pause while the vendors and shoppers listened. The displays in the little wooden cabins (made, we were told, by a local man who donates them each year) were filled with the work of local families: a lady selling exquisite herbal wreaths and jars of berry jam, a booth of Christmas decorations carved from birch logs, buttons embroidered with wild birds in stitches so tiny they looked as though they’d been painted. On the church steps a table was piled with thick, warm hand-knit socks made by local farm women to supplement their income. We bought a pair and the tag told us they were knit by Laura. We hoped we’d made her Christmas a little merrier.

The market we visited our last night in Germany was memorable for its setting. Deep in a ravine in the middle of the Black Forest, the market cabins sat under the tall stone arches of a soaring viaduct of the Devil's Valley Railway. As we shopped, an occasional train whizzed overhead, so far above us that we couldn’t hear it over the merry buzz of the shoppers around us. About half the booths were selling local foods and drinks – sizzling bratwurst, grilled meats, hot pretzels, steaming mugs of gluhwein. This woodland setting is behind Hofgut Sternen, an historic inn that’s been welcoming visitors to the Ravenna Gorge for more than a century.