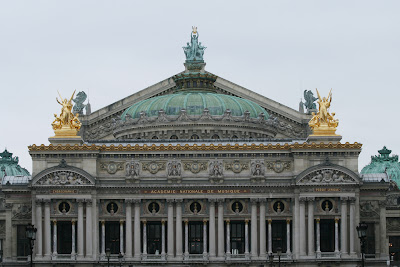 Nestled amongst the grand magasins, Paris' most established department stores, lies the elaborate façade of the Opera Garnier. From the top floor of Galleries Lafayette get a bird’s eye view while taking the edge off your appetite in a casual cafeteria setting. Look closely and you might be able to descern the colony of bees that inhabit the rooftop and produce over a ton of honey each year together with their siblings that live atop the Opera Bastille.

Equally as impressive as the Second Empire façade is the ornate interior, which together equated the most expensive building in Paris for its time. Those with tickets in hand are ushered in beneath the busts of Beethovens and Mozarts, through the lobby, up the marble staircase and into the gilded and velvet swathed opera hall. A seven-ton crystal chandelier tops Marc Chagall’s dreamy fresco, an anachronism that the room wears well. Squint your eyes to airbrush audience attire and time travel back to the 19th century when, during a performance of Faust, a counterweight of the chandelier came crashing down and inspired the novel The Phantom of the Opera. 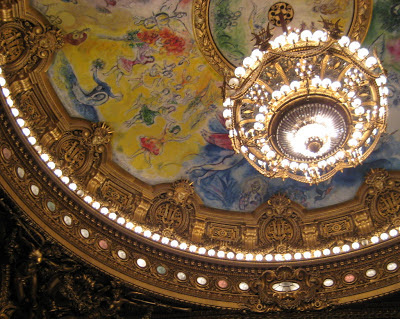 “But how do I obtain tickets?” you might ask. Don’t waste your time on the opera tour that is little more than a 10-euro saunter through the halls. There are several ways to book tickets for a ballet or opera performance that will allow you to experience the Opera Garnier in all its glory, as the lights dim and the curtain rises.

It's best to be date savvy and stake claim on the reasonably priced tickets as soon as they become available. Sales are staggered: first the Internet, then telephone, and lastly the box office releases tickets.

Verify the location of the show as the modern Opera Bastille hosts an equal share of the performances but lacks the belle époque magic. Located in the Place de la Bastille where many a head was offed, it was intended to be an “opera populaire” welcoming all walks of patrons. It is an angular eyesore but once beyond the external structure, functional modernity resonates within the star-ship sleek interior and even the farthest seats offer an unimpeded view of the performance.

On the opera’s website mid range places at 30 to 40 euros are quickly snapped up. For those that want to splurge on prime seats, it is a completely different experience from the front rengs, detail rich with couture costumes, dancers’ expressions and the patter of ballet slippers discernable through the orchestra bruit.

Reserving by phone is an option if you speak French but even those making a local call will be charged by the minute, as is the custom for phone service in France.

For the spontaneous-natured, visit the ticket office (located on the side of the building) to see what is available, but beware, cheap seats aren't the bargain they appear. Those labelled “visibilité réduite” may mean that your head grazes the rafters or you’ll have to strain for a peek at the stage limits, which I find terribly frustrating.

A cultural night out in one of the most beautiful buildings in Paris is well worth the effort. It also gives you a chance to doll up, though black tie attire attracts as much attention as wearing a Halloween costume would. I once shared a box with a dancer’s mother who complained of the tourists in their blue jeans. When it comes to opera attire, a happy medium is classiest.

To find out more about availability and ticket release dates visit the Opera de Paris website. Signing up for their newsletter will keep you in the know. I once attended a costume sale at the Opera Garnier that was announced via their newsletter. Nothing is more surreal than men trying on crinoline gowns and penguins promenading through the opera halls. After sifting through racks and racks of costumes I settled on a Napoleon hat and a corduroy corset and bird’s nest headpiece that were worn in a representation of William Tell.

If you are interested in getting to know more about Paris architecture, I recommend One Thousand Buildings of Paris

a dictionary-sized tome of old and new.