Ok the numbers for the year are in and Neilson Soundscan has sent over the list of the top selling gospel projects for 2007.

At number 10 is Kirk Franklin with Vol. 1-Songs For The Storm, which sold a respectable 62,000 units. Next up was Wow Gospel #1s which pulled in 72,000 units. Number 8 is R&B legend and new gospel diva Patti LaBelle with over 83,000 fans purchasing her debut gospel project The Gospel According to Patti LaBelle. Way to go Ms. Patti...came out the blocks swinging. Tye Tribbett and GA were 7th with 84,000 units sold for their Victory CD. J Moss inched out Tye for the 6th place spot with 84,001 CDs sold for 2007.

Now onward to the top 5...The Clark Sisters wrapped up the Stellar Awards recently and did the same for sales with over 94,000 CD's sold in 2007 making them 5th in the ranking. Minister Juanita Bynum may have gone through some storms on the personal front, (pick up Kirk’s CD Prophetess)but as far as record sales she is running smooth for 2007 with 101,000 units of her Piece of My Passion being purchased making her 4th on the list. 3rd place goes to Kirk Franklin, surprise, surprise, surprise as his latest’s CD Fight of My Life which has only been out what...a few months...has already sold 102,000 units. Marvin Sapp brought the house down with his performance of Never Would Have Made it at the BET Celebration of Gospel and he apparently is bringing it down in the homes of many as his CD Thirsty has sold some 124,000 copies for the year 2007. That puts him 2nd on the list!

Now for the number one selling gospel project of 2007...drum roll please... 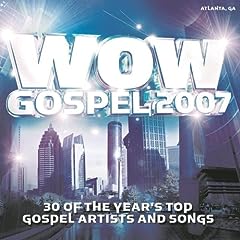 It's WOW GOSPEL! That's right folks variety is the spice of life! We tend to like everybody that sings gospel music so projects that feature many artists at the same time soar right up the charts. Wow Gospel sold over 201,000 units and it's still on the charts for 2008.

That's it for 2007 in terms of numbers of units sold. Was your artist on the list? If you didn't see your favorites at the top then go out and buy their projects. Support these artist and let them know just how much you love their music.