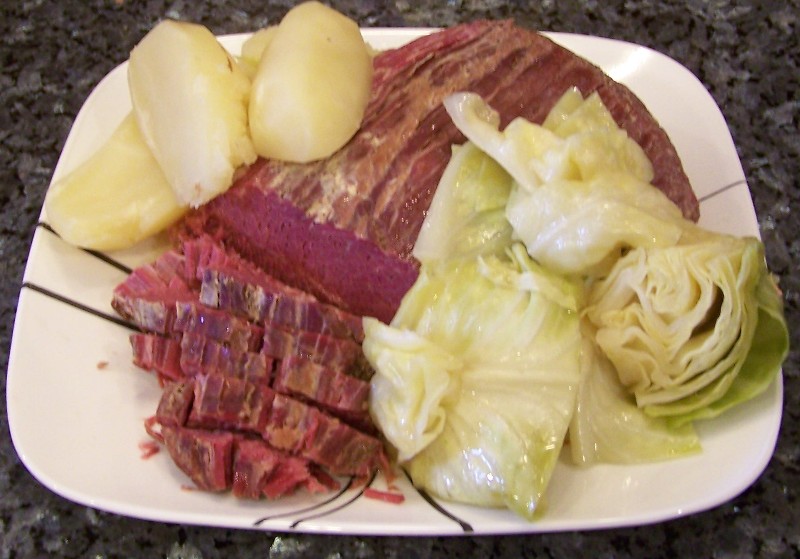 Corned Beef and Cabbage is one of my family’s favorite one-pot meals. The dish is decidedly Irish, and was first prepared in the United States by the Irish immigrants who settled in New England. Hence, the dish is also known as New England Boiled Dinner.

Corned Beef and Cabbage is a great dish to serve for non-special occasions, however, including busy weeknights. In fact, it is a quick and easy meal requiring minimal hands-on time.

In anticipation of St. Patrick’s Day, corned beef, cabbage, and potatoes are featured sale items at almost every grocery store near the end of February and during the month of March (obviously grocers don’t do research on what the Irish actually serve on the holiday!), which is reason enough to prepare this simple one-pot meal several times during March. In fact, you might even purchase several to freeze so you can serve this meal during the months when grocery stores don’t carry corned beef.

If you haven’t made corned beef and cabbage before, now is the perfect time to do so. Just make sure you don’t serve it on St. Patrick’s Day and pass it off to your guests as something the Irish are serving!

Corned beef comes in several varieties; flats and points are the most popular and are readily available in grocery stores. These are the traditional cuts and have a layer of fat on the bottom; some have a lot of fat inside too. Try to choose meat that has as little fat as possible. Flats, which are slightly more expensive than points, are easier to slice. An alternative is a corned round roast of beef, available at butcher shops and some of the larger grocery stores; it is much leaner than the flats and points, but tends to be a little dry compared to the flats and points which are cuts from the brisket .

Wash the corned beef and place it in a slow cooker; cover with water and cook on low at least 8 hours or on high 3 hours then low 1 or 2 more hours. If there is a seasoning packet, throw it away, or if there are spices on the corned beef, make sure they are completely washed off. (Of course you can use them, but the flavors in the packet tend to be overpowering, especially for the vegetables when they are cooked in the corned beef liquid.)

To serve, slice the corned beef across the grain and serve with the potatoes and cabbage.


You Should Also Read:
Corned Beef & Potato Casserole (using leftovers from this dinner)