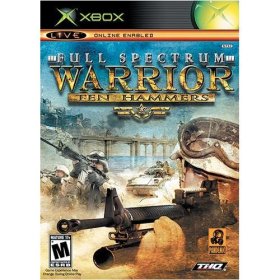 The game takes place in the fictional country of Zekistan, which is awash in terrorists, insurgents, and Taliban loyalists. In the first game, the country's dictator, Al-Afad, was captured, along with many of his officers. In Ten Hammers, only one province remains to be secured: the Tien Hamir area, where Mullah Qari Ra'id is attempting to hold off the coalition forces. Even more, Al-Afad's remaining loyalists have also infiltrated the region and are trying to stage their own rebellion. Opposing these forces are the Zekistan militia, which is being trained as a peacekeeping force, the United States, and Great Britain.

Players of the first game will be familiar with the controls; there are two fire teams of four soldiers (a team leader, an automatic rifleman, a grenadier, and a rifleman). Cover plays an important part, and straying out of a defensive position usually results in death fairly quickly. Strategies like flanking, using smoke grenades, and suppressing fire will help your soldiers live longer and achieve their objective.

In addition to these classic elements, new features have also been implemented. Fire teams can now split up into 2 2-man buddy teams for extra flexibility. Mechanized units such as Bradley Fighting Vehicles will occasionally join up as a third squad, and so will units of British soldiers and American special forces. Some two-story buildings can be entered to provide both cover and a higher angle against enemies with cover. A new special ability has been added for team leaders and riflemen, allowing them to take precision shots at enemies partially behind cover (though the process of aiming puts them at risk). Air strikes can be called in via a laser designator . New commands for movement allow for shooting on the run or moving stealthily.

A new multiplayer mode has been added, with a variety of scenarios and locations. Some pit elite insurgent snipers against US infantry, some have fights between Al-Afad's loyalists and the Al-Ra'id, and one even has a four-way battle between Al-Afad, Al-Ra'id, the Zekistan militia, and British mercenaries. The Zekistan forces operate differently than the British and American forces; instead of moving in squads, they move and are commanded as individuals.

One minor annoyance that I have with this game is that there seems to be less development on the part of the soldiers. Only one team (Alpha) is carried over from the first FSW; the Bravo team in this game consists of new recruits. While the official Ten Hammers website does have short 1-to-2 sentence descriptions of Bravo team, there are no biographies of them in the manual or in-game.Character development in cinematics seems lessened, as well. In the first game, you were made to care about your soldiers, whereas in this one they seem less like real people.

Another annoyance are several bugs that make the game unbeatable and require a level restart; one such bug is located in the second level, where you must bring an injured enemy officer back to a CASEVAC. If you have an injured soldier being carried in the same squad as the enemy officer, neither casualty will be able to be taken care of, and the two carriers will mill awkwardly around the medical truck. Some have reported bugs of friendly soldiers just freezing and not being able to continue the mission.

The graphics and sound seem approximately of the same quality as the first game, thus furthering the idea of this being an expansion pack-type game. Certainly this is a good game, with plenty of solid additions and of course new missions, but it just doesn't feel like a sequel.