In WinBack 2 you're an assault team that rescues hostages and captures the bad guys. You work with three main characters and are primarily into stealth. 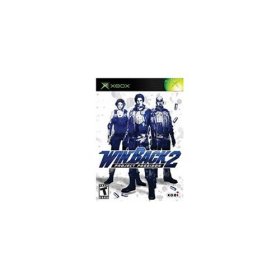 This is very similar to Splinter Cell - except that you are alternately a white guy, an African-American guy, or a buff woman. I do appreciate that they give you these different character types to work with, and that there's a female option in there.

For your gameplay you are primarily working with pretty straightforward weapons. Your activities include pushing switches, dodging lasers and shooting bad guys.

When you shoot, you have to actually aim using the left trigger - you get a red laser beam that helps you aim. You can take cover, you can peer around corners.

I really love the Splinter Cell series, and enjoy many other combat style games as well. For some reason this one just didn't grab my interest like the other games did. The graphics just aren't that impressive - you are in a bland outfit, going through a bland, blocky world. The sound is even worse - the characters seem not to care at all about the situations they are in.

The mini-map on the screen always makes me think of a little mouse moving through a maze. At least a mouse gets some cheese when they win.

I enjoy having the variety of character types (small though it may be) and I like the idea of this type of game in general - I just didn't think this was a great implementation. Maybe with version 3 they'll work on the graphics and audio to really bring this up to current standards.