If you've got a PS2 or PS3 and love the TV series 24 with Keifer Sutherland, the 24 game is worth taking a look at. Just know that the game isn't perfect. 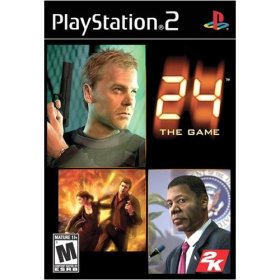 First, I'll admit that I am both a big fan of the 24 series and also of Keifer Sutherland. We were too busy to watch the first seasons live, but instead we waited for each one to end and then rented the DVDs for a full-out marathon of watching them. It really helped not to have to wait through commercials or for the next week to come to see what happened. So I'm probably the ideal target audience for a game like this.

I also love shooting games and Bond-style games, so I really was looking forward to playing this. It has the real voices of Keifer and other cast members, and unfolds based on the time between Season 2 and Season 3. It uses the time music style and intro 24 addicts know and love. Your game is broken into "hour long segments" which in reality probably take you 15 minutes or so to play through, depending on your gaming skill.

Unfortunately, gameplay just did not live up to the expectations. The camera was *awful* - there were numerous problems that made the game very frustrating, very quickly. At times you're running along in various terrorist areas, crouching behind cover, jumping over boxes, peering around doors. You might have a few fellow CTU units with you who do basic operations like blowing open doors, but they're rarely any help in a firefight.

The enemies don't show great AI either. It also gets frustrating that an enemy might suddenly decide to surrender while you're in the middle of shooting him - and by the time you've pulled your finger from the trigger, he's already killed by the bullets that were in the air when he surrendered. So you get penalized for his death.

There are also little decoding style puzzles, car driving missions and so on tossed in to keep variety interesting. It figures that none of them are either challenging or fun to play. With all of the thousands of games on the market that nail each of these areas, I wasn't asking for spectacular here - just reasonable. It just wasn't.

It almost seems that they raced this game out quickly in order to get sales and nothing got quite done properly. Which is a real shame, because the series is well loved by millions of people who buy the DVD sets, watch the shows repeatedly and who would LOVE to get this game and replay it to immerse themselves in the world. There is certainly great potential for replayability here, to keep going through a mission over and over to nail the top rating. If the missions were fun, I know I would gladly do that to hear Jack's voice and to be in that world. But with the way things were designed, I'm going to have to wait for a sequel to come out that hopefully spends more time in development.

As a side note, this game does play fine on the PS3.

Buy 24 the Video Game from Amazon.com