We are generally great fans of mech games, and have played many of them. We were psyched when Gundam came out for the PS3 - and very disappointed when we played it. 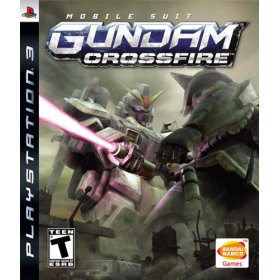 If you haven't watched the animated series or played other Gundam games, you are engaged in a great war involving a set of mechanised large robots fighting another set of almost identical large robots. They can stomp on tanks, kick over buildings and engage in hand to hand energy-sword combat. Think of gigantic samurai warriors who enjoy both blade and gun.

The two sides here are the Federation forces, protecting Earth against the Zeon - an Earth colony who has come back to Earth to take over. All of the fighting takes place in various locations on Earth, which by now has had half of its population wiped out by this fighting.

Don't worry too much about plotline here, though. Really what happens is you are dropped into a landscape and told to blow up every enemy unit you find. While most games give you training and guidance at the beginning, this game tosses you into the fray, without even a hint of what to do or how to do it. Expect to get a few sad deaths before you get the hang of things. Of course that's assuming you start out on the standard difficulty level - there are five difficulties here, including a 'very easy' suitable for 5 year olds.

Speaking of five year olds, the graphics really needed much more work to be up to PS3 standards. The mechs themselves are OK, with a fair amount of detail, shadowed edges, reflective surfaces little details of logo and lettering and battle scarring. There is a realistic feel to how they move.

On the other hand, the world you tromp around in is PS2 level in quality, if not a little worse. I've definitely seen better water animation in many PS2 games, as well as tree and landscapes.

Gameplay ranges from frustrating to laughable. You get stuck on invisible walls. When you slash at enemies, you go into the "black knight" of the Monty Python Holy Grail movie, where limbs fall off and the robot hobbles after you without any arms. You do get to upgrade as you progress, earning more options. You can customize your suits in your hangar - but the interface is very clunky and looks almost PS1 in style.

They do have some nice features that show some thought - if you fire off a rocket style weapon, a cloud of smoke envelops you and you have to wait a few seconds (or move out of it) before you can see well again.

In addition, we had problems with stuttering sound, to the point that we had to reboot our PS3 and try again. Luckily, it went away once we did that.

In general, this was just not a fun game for us to play, which was a real disappointment. Maybe a future release for the PS3 will have the time spent to fix many of these issues and draw us into playing it repeatedly, like we play our other mech games.