Bodmin Moor is famous for its extensive stone monuments and distinctive landscape features. To many Pagans these mark, and are part of, a grid of natural energy that runs through the land – the equivalent of acupuncture meridians on the human body. The monuments and landscape features mark ‘power points’ where this energy expresses itself and can be tapped for a variety of purposes. What this energy is made of and how it works, is still a matter of serious debate amongst Pagans and New Age ‘Earth Energy’ aficionados. It is perceptible through techniques such as dowsing, and people have been able to attune directly to it more by accident than design. An example of this happened to the dowser Rosemary Gundry when she was working with a pendulum on a ‘Witch Stone’ in the town of Honiton, in Devon UK.

Rosemary felt a strong reaction to her dowsing on one area of the stone. When she put her pendulum away and put her hands close to the spot where she felt the reaction she had the sensation as though the stone was rocking. However the other members of the group Rosemary was with could clearly see that the stone was not moving. She felt an interplay of forces between her and the stone, but wasn’t sure if it was a cycling of bio-energy from her or if the stone was projecting a power of its own. When she let go of the stone her senses returned to normal in a few seconds. Other members of the group were able to feel the same effects when they placed their hands in the same place.

Dowsers tend to agree that the ‘power’ of a nexus point – whether or not it is marked or obvious – changes markedly when night falls, and sometimes not in a good way. A dowser using a pendulum in the Rollright stone circle at twilight became dizzy as she left the circle and dropped it. Since the grass was almost waist high where she was she thought she wouldn’t be able to find it again. But, when she ran her hands through the grass she found the string “Sticking straight up in the air like the Indian rope trick”.

Jamaica Inn is located near a ‘Primary Ley’ – one that conducts a lot of earth energy around the country and may increase the energy of local ley. This one passes through Bury St.Edmunds, Avebury, The Cheese Wring, St Michaels Mount, and finaly the tip of the UK called The Lizard. The Cheese Wring is a local rock formation only a few miles from the Inn and the extra energy from it may be a factor in the many hauntings reported at the Inn. This could also account for Bodmin Moor’s ‘spooky’ reputation.

When my wife and I stayed at Jamaica Inn our room was in a relatively new section that had been added on to the original building. The time we spent there passed uneventfully ghost-wise as most of the haunting happen in the rooms of the original building including the guest bedrooms in the rooms above the bar. The most haunted area is supposed to be the current reception area that used to be the old generator room. This is interesting in light of the way magickal energy for circle casting reacts, and interferes with, electronic devices. As anyone who has cast an effective circle that passed through their computer or other electronic device and had it ruined it will tell you.

A UK paranormal television programme called “Most Haunted” investigated the Inn in 2004, the results of which can be still be seen on Youtube. The activity in the generator room was particularly dramatic which may be explained by the finding of “Little Pirates” poppets in there when the room was renovated and made into the Reception area. They are now part of the exhibits displayed in the smuggling museum attached to Jamaica Inn in what were once the old stables. 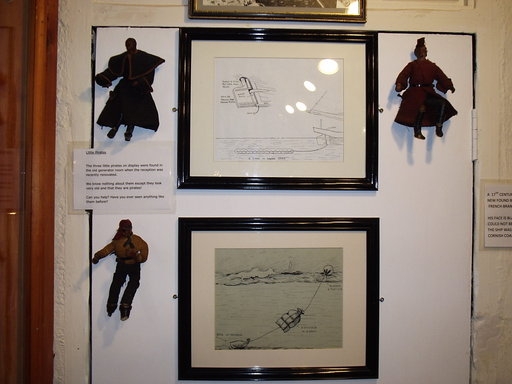 As you can see from the photograph you can get an up-close look at them and, to me, they do look like they have been designed for a magickal purpose. The earth energy may well have interacted with, or channelled, the magickal programming in the puppets’ to produce the dramatic effects experienced by the paranormal programs participants.

The same cause may be behind the ‘ghosts’ heard and experienced by guests and staff at the Inn. There is a theory that people leave an energy imprint in matter that can be ‘read’ the practice of psychometry- a skill which needs a modicum of training and experience to put into practice. However when an event is particularly traumatic -or has a high emotional content - it creates a stronger impression that can be picked up even by the untrained. This information floods the untrained person’s perceptions, causing them to see and hear the ‘recording’ as though it was happening in shared reality and experiencing the incident as a haunting. Environmental influences such as the weather and phases of the moon may affect the strength of the energy available to the ‘recording’, enabling it to work at some times but not others.

As to whether the poppets are meant to be protective ones against smugglers/pirates, or to act as guardians for them opinion was divided amongst the magickal practitioners I showed the pictures to. The feeling I had when I put my hand close to them was of highly a protective nature – similar to house guardians – that could tap into the energy of the ley lines to produce physical effects. The best thing to do to is visit the Smuggling museum at Jamaica Inn and decide for yourself.

Amongst the wisdom of the trees and the whispers in the wind let us find our true path. A Pagan´s circle for asking and sharing.

Herbs and Other Decorations for a Beltane Altar

Precautions In The Use 0f Herbs