How Antibes Weathered the Storm

The streets were empty and businesses closed. The city was as silent as a ghost town save the heavy military presence that rippled out of Cannes, the image of a town in the clutches of war but there was no such crisis. World leaders had gathered at the Palais du Congres to climb the same set of steps we see movie stars pose on during the film festival. President Obama’s request to book Eden Roc, one of the most expensive hotels in the world, was denied due to insufficient staffing or lack of space depending on who you ask. So much for holding a conference during the off season! French president Sarkozy racked up the priciest room in staying at the Majestic.

Those that saw the G20 summit as an excuse to prolong vacation plans began to trickle back into town just in time for the deluge that grayed all of the next week. When the wind kicked up I walked down to the end of the street to greet the waves and my heart beat a little faster with each step closer to the sea.

The old town of Antibes is protected by ramparts, a good twenty feet tall in some sections, which wave crests surpassed pattering on restaurant terraces and the medieval facades. A wave could swallow me up in one lick, I thought, but I couldn’t pry my eyes off the violent sea. In a knee-length coat that caught gusts of wind I had to fight to hold my ground. With a strong enough umbrella I’m sure I could have traveled like Mary Poppins.

After a night of interrupted dreams when shutters hammer on windows, trees do backbends, and power lines are plucked like harp strings, things were relatively calm. With seaside roads closed by a layer of seaweed and branches, traffic stacked up on accessible roads. The weather continued in a pattern raging through the night but was well-mannered enough to abate come morning the whole week through. 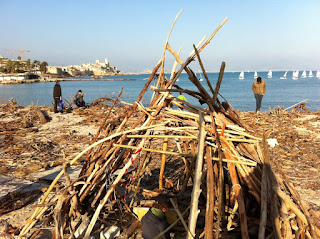 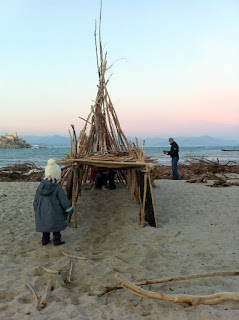 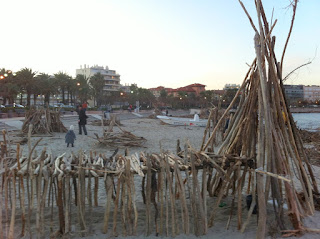 The Cote d’Azur greeted by full November sun for the weekend began to assess damages. The beaches in Cannes and Juan les Pins got off easy ankle deep in sea weed. The restaurants that line the thin strip of beach operated unaffectedly serving full houses of sunglass clad clientele.

The beach in Antibes, however, more closely resembled a beaver dam, the sand hidden underneath branches. Trunks crowned by root canopies and logs as wide as car tires were stripped of their bark by the washing machine tumbling of the ocean. Many beachcombers walked back with arm-fulls of wood, some to feed fireplaces, others for artistic endeavors.

Amidst the carnage of the storm a faerie of driftwood forts has been erected that I’ve been to visit every day since discovering. I asked a brown headed ten year old on his hand and knees if I could enter. When he nodded yes I ducked inside and took a seat on a log. His mother explained, “We spent about two hours yesterday building the structure. When we came back this morning only a few of the logs had fallen.“ Her son continued to fence in a front yard burying the spear tips of snapped branches to stand perpendicular in the sand. Another little person was decorating a found playhouse with bits of plastic. “This is the kitchen,” he said as he gave me the tour.

I intend on making my own contribution to this collective work of art as the weeks wear on. Like all things ephemeral, there is a magic to not knowing how long the forts on the Pointeil beach will remain intact. It will undoubtedly take months to clear the debris.